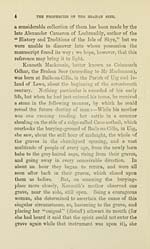 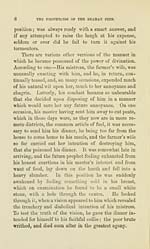 THE PROPHECIES OF THE BRAHAN SEER. D
watched the result. She had not to wait long, for
in a minute or two she noticed a fair lady coming in the
direction of the churchyard, rushing through the air,
from the north. Ou her arrival, the fair one addressed
her thus — " Lift thy distaff from off my grave, and
let me enter my dwelling of the dead." " I shall do
so," answered the other, " when you explain to me what
detained you so long after your neighbours." " That
you shall soon hear," the ghost replied ; " My journey
was much longer than theirs — I had to go all the way
to Norway." She then addressed her: — "I am a
daughter of the King of Norway ; I was drowned while
bathing in that country ; my body was found on the
beach close to v/herq we now stand, and I was in-
. terred in this grave. In remembrance of me, and as a
small reward for your intrepidity and courage, I shall
possess you of a valuable secret— go and find in yonder
lake a small round blue stone, which give to your son,
Kenneth, who by it shall reveal future events." She
did as requested, found the stone, and gave it to
her son, Kenneth. No sooner had he thus received
the gift of divination than his fame spread far and
wide. He was sought after by the gentry through-
out the length and breadth of the land, and no
special assembly of theirs was complete unless Coin-
neach Odhar was amongst them. Being born on the
lands of Seaforth, in the Lews, he was more associated
with that family than with any other in the country,
and he latterly removed to the neighbourhood of Loch
Ussie, on the Brahan estate, where he worked as a
common labourer on a neighbouring farm. He was
very shrewd and clear-headed, for one in his menial