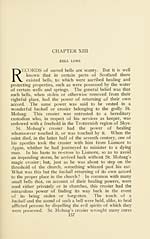 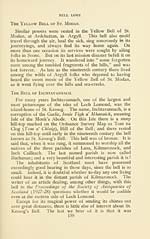 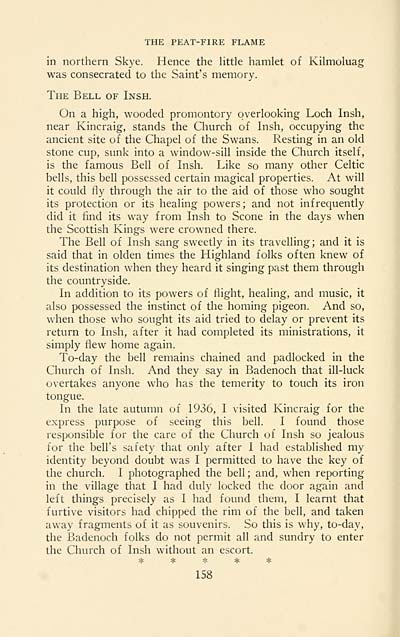 THE PEAT-FIRE FLAME
in northern Skye. Hence the little hamlet of Kilmoluag
was consecrated to the Saint's memory.
The Bell of Insh.
On a high, wooded promontory overlooking Loch Insh,
near Kincraig, stands the Church of Insh, occupying the
ancient site of the Chapel of the Swans. Resting in an old
stone cup, sunk into a window-sill inside the Church itself,
is the famous Bell of Insh. Like so many other Celtic
bells, this bell possessed certain magical properties. At will
it could fly through the air to the aid of those who sought
its protection or its healing powers; and not infrequently
did it find its way from Insh to Scone in the days when
the Scottish Kings were crowned there.
The Bell of Insh sang sweetly in its travelling; and it is
said that in olden times the Highland folks often knew of
its destination when they heard it singing past them through
the countryside.
In addition to its powers of flight, healing, and music, it
also possessed the instinct of the homing pigeon. And so,
when those who sought its aid tried to delay or prevent its
return to Insh, after it had completed its ministrations, it
simply flew home again.
To-day the bell remains chained and padlocked in the
Church of Insh. And they say in Badenoch that ill-luck
overtakes anyone who has the temerity to touch its iron
tongue.
In the late autumn of 1936, I visited Kincraig for the
express purpose of seeing this bell. I found those
responsible for the care of the Church of Insh so jealous
for the bell's safety that only after I had established my
identity beyond doubt was I permitted to have the key of
the church. I photographed the bell; and, when reporting
in the village that I had duly locked the door again and
left things precisely as I had found them, I learnt tliat
furtive visitors had chipped the rim of the bell, and taken
away fragments of it as souvenirs. So this is why, to-day,
the Badenoch folks do not permit all and sundry to enter
the Church of Insh without an escort.
158