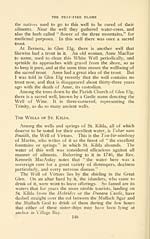 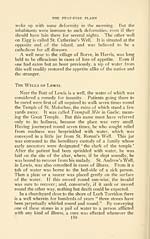 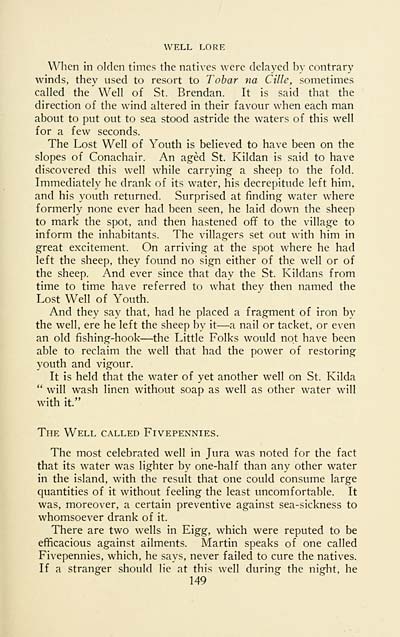 WELL LORE
When in olden times the natives were delayed by contrary
winds, they used to resort to Tobar na Cille, sometimes
called the Well of St. Brendan. It is said that the
direction of the wind altered in their favour when each man
about to put out to sea stood astride the waters of this well
for a few seconds.
The Lost Well of Youth is believed to have been on the
slopes of Conachair. An aged St. Kildan is said to have
discovered this well while carrying a sheep to the fold.
Immediately he drank of its water, his decrepitude left him.
and his youth returned. Surprised at finding water where
formerly none ever had been seen, he laid down the sheep
to mark the spot, and then hastened off to the village to
inform the inhabitants. The villagers set out with him in
great excitement. On arriving at the spot where he had
left the sheep, they found no sign either of the well or of
the sheep. And ever since that day the St. Kildans from
time to time have referred to what they then named the
Lost Well of Youth.
And they say that, had he placed a fragment of iron by
the well, ere he left the sheep by it — a nail or tacket, or even
an old fishing-hook — the Little Folks would not have been
able to reclaim the well that had the power of restoring
youth and vigour.
It is held that the water of yet another well on St. Kilda
" will wash linen without soap as well as other water will
with it."
The Well called Fivepennies.
The most celebrated well in Jura was noted for the fact
that its water was lighter by one-half than any other water
in the island, with the result that one could consume large
quantities of it without feeling the least uncomfortable. It
was, moreover, a certain preventive against sea-sickness to
whomsoever drank of it.
There are two wells in Eigg, which were reputed to be
efficacious against ailments. Martin speaks of one called
Fivepennies, which, he says, never failed to cure the natives.
If a stranger should He at this well during the night, he
149