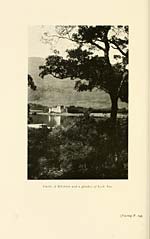 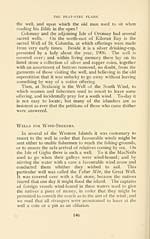 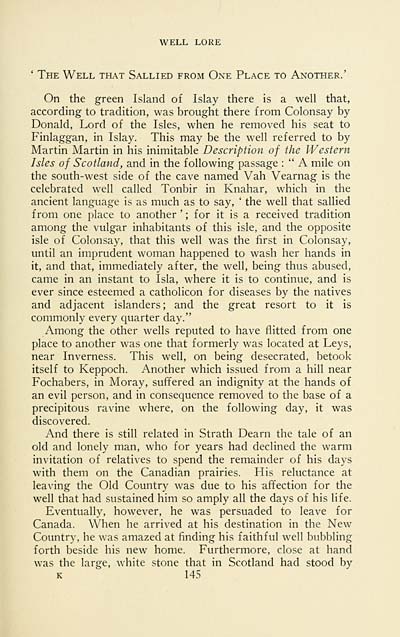 WELL LORE
' The Well that Sallied from One Place to Another.'
On the green Island of Islay there is a well that,
according to tradition, was brought there from Colonsay by
Donald, Lord of the Isles, when he removed his seat to
Finlaggan, in Islay. This may be the well referred to by
Martin Martin in his inimitable Description of the Western
Isles of Scotland, and in the following passage : " A mile on
the south-west side of the cave named Vah Vearnag is the
celebrated well called Tonbir in Knahar, which in the
ancient language is as much as to say, ' the well that sallied
from one place to another ' ; for it is a received tradition
among the vulgar inhabitants of this isle, and the opposite
isle of Colonsay, that this well was the first in Colonsay,
until an imprudent woman happened to wash her hands in
it, and that, immediately after, the well, being thus abused,
came in an instant to Isla, where it is to continue, and is
ever since esteemed a catholicon for diseases by the natives
and adjacent islanders; and the great resort to it is
commonly every quarter day."
Among the other wells reputed to have flitted from one
place to another was one that formerly was located at Leys,
near Inverness. This well, on being desecrated, betook
itself to Keppoch. Another which issued from a hill near
Fochabers, in Moray, suffered an indignity at the hands of
an evil person, and in consequence removed to the base of a
precipitous ravine where, on the following day, it was
discovered.
And there is still related in Strath Dearn the tale of an
old and lonely man, who for years had declined the warm
invitation of relatives to spend the remainder of his days
with them on the Canadian prairies. His reluctance at
leaving the Old Country was due to his affection for the
well that had sustained him so amply all the days of his life.
Eventually, however, he was persuaded to leave for
Canada. When he arrived at his destination in the New
Country, he was amazed at finding his faithful well bubbling
forth beside his new home. Furthermore, close at hand
was the large, white stone that in Scotland had stood by
K 145