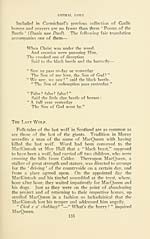 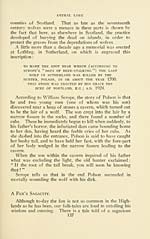 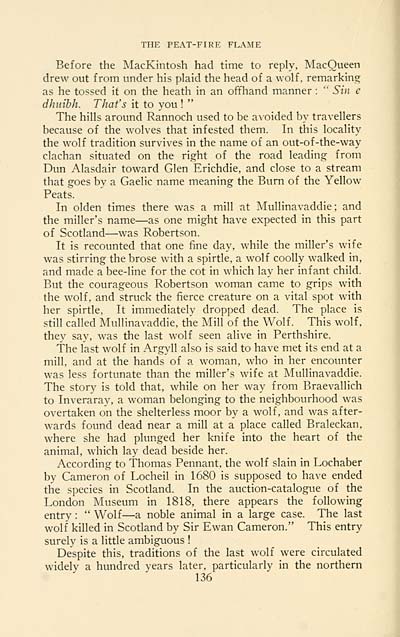 THE PEAT-FIRE FLAME
Before the MacKintosh had time to reply, MacQueen
drew out from tmder his plaid the head of a wolf, remarking
as he tossed it on the heath in an offhand manner : " Sin c
dhuibh. That's it to you ! "
The hills around Rannoch used to be a\oided by travellers
because of the wolves that infested them. In this locality
the wolf tradition survives in the name of an out-of-the-way
clachan situated on the right of the road leading from
Dun Alasdair toward Glen Erichdie, and close to a stream
that goes by a Gaelic name meaning the Burn of the Yellow
Peats.
In olden times there was a mill at Mullinavaddie ; and
the miller's name — as one might have expected in this part
of Scotland — was Robertson.
It is recounted that one fine day. while the miller's wife
was stirring the brose with a spirtle. a wolf coolly walked in,
and made a bee-line for the cot in which lay her infant child.
But the courageous Robertson w^oman came to grips with
the wolf, and struck the fierce creature on a vital spot with
her spirtle, It immediately dropped dead. The place is
still called Mullinavaddie, the Mill of the Wolf. This wolf,
they say, was the last wolf seen alive in Perthshire.
The last wolf in Argyll also is said to have met its end at a
mill, and at the hands of a woman, who in her encounter
was less fortunate than the miller's wife at Mullinavaddie.
The story is told that, while on her way from Braevallich
to Inveraray, a woman belonging to the neighbourhood was
overtaken on the shelterless moor by a wolf, and was after-
wards found dead near a mill at a place called Braleckan,
where she had plunged her knife into the heart of the
animal, which lay dead beside her.
According to Thomas Pennant, the wolf slain in Lochaber
by Cameron of Locheil in 1680 is supposed to have ended
the species in Scotland. In the auction-catalogue of the
London Museum in 1818, there appears the following
entry : " Wolf — a noble animal in a large case. The last
wolf killed in Scotland by Sir Ewan Cameron." This entry
surely is a little ambiguous !
Despite this, traditions of the last wolf were circulated
widely a hundred years later, particularly in the northern
136