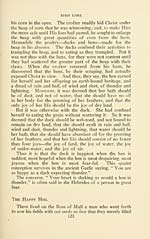 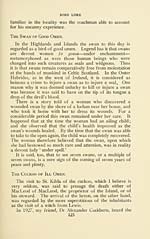 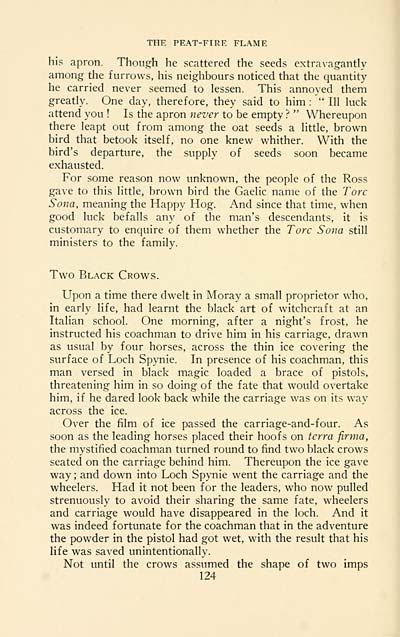 THE PEAT-FIRE FLAME
his apron. Though he scattered the seeds extravagantly
among the furrows, his neighbours noticed that the quantity
he carried never seemed to lessen. This annoyed them
greatly. One day, therefore, they said to him : '" 111 luck
attend you ! Is the apron never to be empty ? " Whereupon
there leapt out from among the oat seeds a little, brown
bird that betook itself, no one knew whither. With the
bird's departure, the supply of seeds soon became
exhausted.
For some reason now unknown, the people of the Ross
gave to this little, brown bird the Gaelic name of the Tore
Sona, meaning the Happy Hog. And since that time, when
good luck befalls any of the man's descendants, it is
customary to enquire of them whether the Tore Sona still
ministers to the family.
Two Black Crows.
Upon a time there dwelt in Moray a small proprietor who,
in early life, had learnt the black art of witchcraft at an
Italian school. One morning, after a night's frost, he
instructed his coachman to drive him in his carriage, drawn
as usual by four horses, across the thin ice covering the
surface of Loch Spynie. In presence of his coachman, this
man versed in black magic loaded a brace of pistols,
threatening him in so doing of the fate that would overtake
him, if he dared look back while the carriage was on its way
across the ice.
Over the film of ice passed the carriage-and-four. As
soon as the leading horses placed their hoofs on terra firma,
the mystified coachman turned round to find two black crows
seated on the carriage behind him. Thereupon the ice gave
way ; and down into Loch Spynie went the carriage and the
wheelers. Had it not been for the leaders, who now pulled
strenuously to avoid their sharing the same fate, wheelers
and carriage would have disappeared in the loch. And it
was indeed fortunate for the coachman that in the adventure
the powder in the pistol had got wet, with the result that his
life was saved unintentionally.
Not until the crows assumed the shape of two imps
124