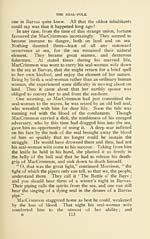 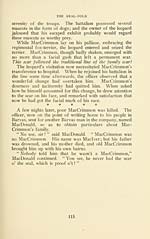 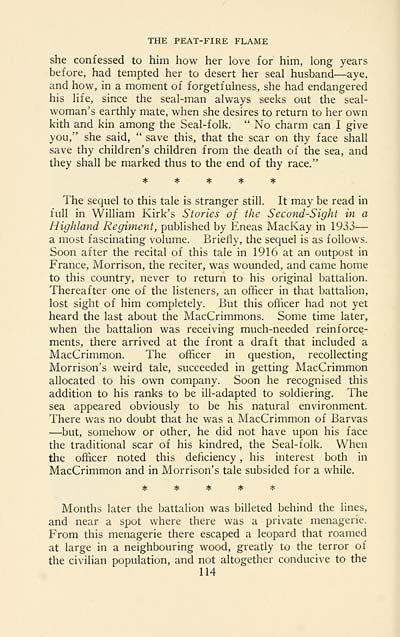 THE PEAT-FIRE FLAME
she confessed to him how her love for him, long years
before, had tempted her to desert her seal husband — aye,
and how, in a moment of forgetfulness, she had endangered
his life, since the seal-man always seeks out the seal-
woman's earthly mate, when she desires to return to her own
kith and kin among the Seal-folk. " No charm can I give
you," she said, " save this, that the scar on thy face shall
save thy children's children from the death of the sea, and
they shall be marked thus to the end of thy race."
The sequel to this tale is stranger still. It may be read in
full in William Kirk's Stories of the Second-Sight in a
Highland Regiment, published by Eneas MacKay in 1933 —
a most fascinating volume. Briefly, the sequel is as follows.
Soon after the recital of this tale in 1916 at an outpost in
France, Morrison, the reciter, was wounded, and came home
to this country, never to return to his original battalion.
Thereafter one of the listeners, an officer in that battalion,
lost sight of him completely. But this officer had not yet
heard the last about the MacCrimmons. Some time later,
when the battalion was receiving much-needed reinforce-
ments, there arrived at the front a draft that included a
MacCrimmon. The officer in question, recollecting
Morrison's weird tale, succeeded in getting MacCrimmon
allocated to his own company. Soon he recognised this
addition to his ranks to be ill-adapted to soldiering. The
sea appeared obviously to be his natural environment.
There was no doubt that he was a MacCrimmon of Barvas
— but, somehow or other, he did not have upon his face
the traditional scar of his kindred, the Seal-folk. When
the officer noted this deficiency , his interest both in
MacCrimmon and in Morrison's tale subsided for a while.
Months later the battalion was billeted behind the lines,
and near a spot where there was a private menagerie.
From this menagerie there escaped a leopard that roamed
at large in a neighbouring wood, greatly to the terror of
the civilian population, and not altogether conducive to the
114