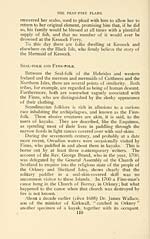 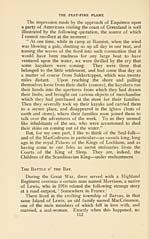 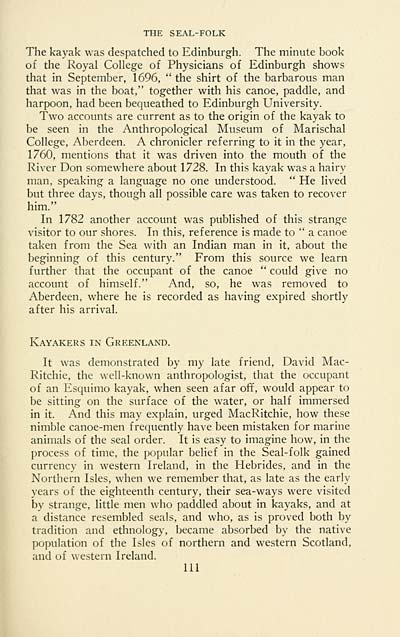 THE SEAL-FOLK
The kayak was despatched to Edinburgh. The minute book
of the Royal College of Physicians of Edinburgh shows
that in September, 1696, *' the shirt of the barbarous man
that was in the boat," together with his canoe, paddle, and
harpoon, had been bequeathed to Edinburgh University.
Two accounts are current as to the origin of the kayak to
be seen in the Anthropological Museum of Marischal
College, Aberdeen. A chronicler referring to it in the year,
1760, mentions that it was driven into the mouth of the
River Don somewhere about 1728. In this kayak was a hairy
man, speaking a language no one understood. " He lived
but three days, though all possible care was taken to recover
him."
In 1782 another account was published of this strange
visitor to our shores. In this, reference is made to " a canoe
taken from the Sea with an Indian man in it, about the
beginning of this century." From this source we learn
further that the occupant of the canoe " could give no
account of himself." And, so, he was removed to
Aberdeen, where he is recorded as having expired shortly
after his arrival.
Kayakers in Greenland.
It was demonstrated by my late friend, David Mac-
Ritchie, the well-known anthropologist, that the occupant
of an Esquimo kayak, when seen afar off, would appear to
be sitting on the surface of the water, or half immersed
in it. And this may explain, urged MacRitchie, how these
nimble canoe-men frequently have been mistaken for marine
animals of the seal order. It is easy to imagine how, in the
process of time, the popular belief in the Seal-folk gained
currency in western Ireland, in the Hebrides, and in the
Northern Isles, when we remember that, as late as the early
years of the eighteenth century, their sea-ways were visited
by strange, little men who paddled about in kayaks, and at
a distance resembled seals, and who, as is proved both by
tradition and ethnology, became absorbed by the native
population of the Isles of northern and western Scotland,
and of western Ireland.
ill