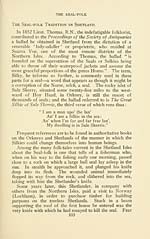 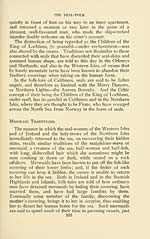 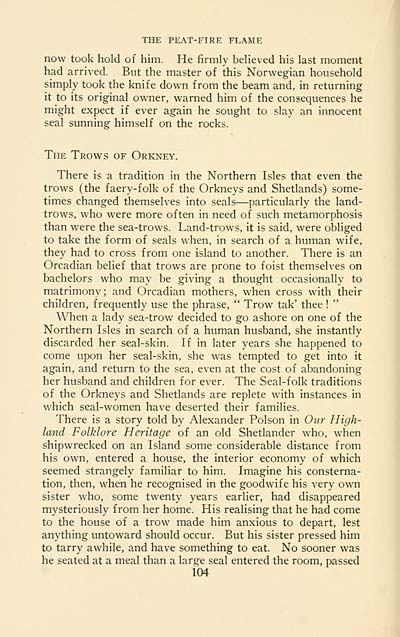 THE PEAT-FIRE FLAME
now took hold of him. He firmly believed his last moment
had arrived. But the master of this Norwegian household
simply took the knife down from the beam and, in returning
it to its original owner, warned him of the consequences he
might expect if ever again he sought to slay an innocent
seal sunning himself on the rocks.
The Trows of Orkney.
There is a tradition in the Northern Isles that even the
trows (the faery-folk of the Orkneys and Shetlands) some-
times changed themselves into seals — particularly the land-
trows, who were more often in need of such metamorphosis
than were the sea-trows. Land-trows, it is said, were obliged
to take the form of seals when, in search of a human wife,
they had to cross from one island to another. There is an
Orcadian belief that trows are prone to foist themselves on
bachelors who may be giving a thought occasionally to
matrimony ; and Orcadian mothers, when cross with their
children, frequently use the phrase, " Trow tak' thee ! "
When a lady sea-trow decided to go ashore on one of the
Northern Isles in search of a human husband, she instantly
discarded her seal-skin. If in later years she happened to
come upon her seal-skin, she was tempted to get into it
again, and return to the sea, even at the cost of abandoning
her husband and children for ever. The Seal-folk traditions
of the Orkneys and Shetlands are replete with instances in
which seal-women have deserted their families.
There is a story told by Alexander Poison in Our High-
land Folklore Heritage of an old Shetlander who, when
shipwrecked on an Island some considerable distance from
his own, entered a house, the interior economy of which
seemed strangely familiar to him. Imagine his consterna-
tion, then, when he recognised in the goodwife his very own
sister who, some twenty years earlier, had disappeared
mysteriously from her home. His realising that he had come
to the house of a trow made him anxious to depart, lest
anything untoward should occur. But his sister pressed him
to tarry awhile, and have something to eat. No sooner was
he seated at a meal than a large seal entered the room, passed
104