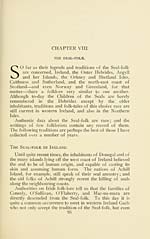 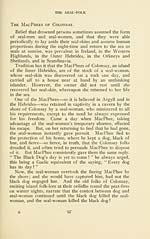 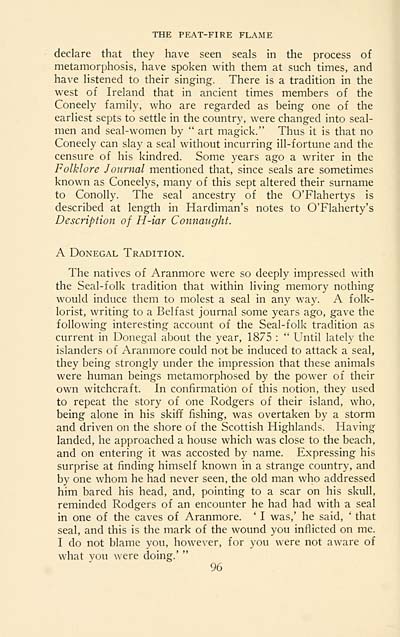 THE PEAT-FIRE FLx\ME
declare that they have seen seals in the process of
metamorphosis, have spoken with them at such times, and
have listened to their singing. There is a tradition in the
west of Ireland that in ancient times members of the
Coneely family, who are regarded as being one of the
earliest septs to settle in the country, were changed into seal-
men and seal- women by " art magick." Thus it is that no
Coneely can slay a seal without incurring ill-fortune and the
censure of his kindred. Some years ago a writer in the
Folklore Journal mentioned that, since seals are sometimes
known as Coneelys, many of this sept altered their surname
to Conolly. The seal ancestry of the O'Flahertys is
described at length in Hardiman's notes to O'Flaherty's
Description of H-iar Connaught.
A Donegal Tradition.
The natives of Aranmore were so deeply impressed with
the Seal-folk tradition that within living memory nothing
would induce them to molest a seal in any way. A folk-
lorist, writing to a Belfast journal some years ago, gave the
following interesting account of the Seal-folk tradition as
current in Donegal about the year, 1875 : " Until lately the
islanders of Aranmore could not be induced to attack a seal,
they being strongly under the impression that these animals
were human beings metamorphosed by the power of their
own witchcraft. In confirmation of this notion, they used
to repeat the story of one Rodgers of their island, who,
being alone in his skiff fishing, was overtaken by a storm
and driven on the shore of the Scottish Highlands. Having
landed, he approached a house which was close to the beach,
and on entering it was accosted by name. Expressing his
surprise at finding himself known in a strange country, and
by one whom he had never seen, the old man who addressed
him bared his head, and, pointing to a scar on his skull,
reminded Rodgers of an encounter he had had with a seal
in one of the caves of Aranmore. ' I was,' he said, ' that
seal, and this is the mark of the wound you inflicted on me.
I do not blame you, however, for you were not aware of
what you were doing.' "
96