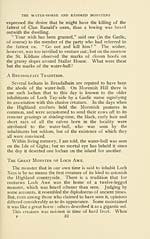 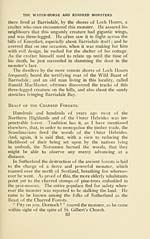 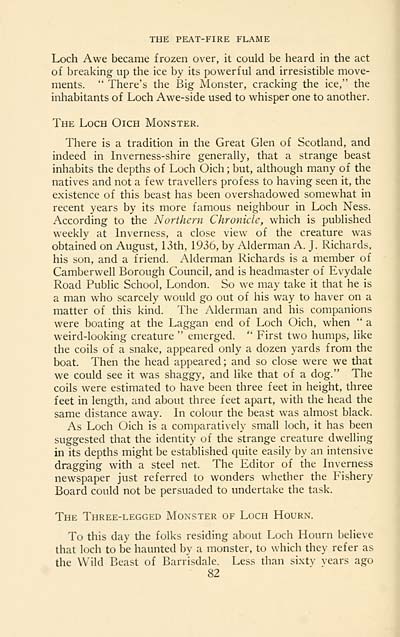 THE PEAT-FIRE FLAME
Loch Awe became frozen over, it could be heard in the act
of breaking up the ice by its powerful and irresistible move-
ments. " There's the Big Monster, cracking the ice," the
inhabitants of Loch Awe-side used to whisper one to another.
The Loch Oich Monster.
There is a tradition in the Great Glen of Scotland, and
indeed in Inverness-shire generally, that a strange beast
inhabits the depths of Loch Oich ; but, although many of the
natives and not a few travellers profess to having seen it, the
existence of this beast has been overshadowed somewhat in
recent years by its more famous neighbour in Loch Ness.
According to the Northern Chronicle, which is published
weekly at Inverness, a close view of the creature was
obtained on August, 13th, 1936, by Alderman A. J. Richards,
his son, and a friend. Alderman Richards is a member of
Camberwell Borough Council, and is headmaster of Evydale
Road Public School, London. So we may take it that he is
a man who scarcely would go out of his way to haver on a
matter of this kind. The Alderman and his companions
were boating at the Laggan end of Loch Oich, when " a
weird-looking creature " emerged. " First two humps, like
the coils of a snake, appeared only a dozen yards from the
boat. Then the head appeared; and so close were we that
we could see it was shaggy, and like that of a dog." The
coils were estimated to have been three feet in height, three
feet in length, and about three feet apart, with the head the
same distance away. In colour the beast was almost black.
As Loch Oich is a comparatively small loch, it has been
suggested that the identity of the strange creature dwelling
in its depths might be established quite easily by an intensive
dragging with a steel net. The Editor of the Inverness
newspaper just referred to wonders whether the Fishery
Board could not be persuaded to undertake the task.
The Three-legged Monster of Loch Hourn.
To this day the folks residing about Loch Hourn believe
that loch to be haunted by a monster, to which they refer as
the Wild Beast of Barrisdale. Less than sixty vears ago
82