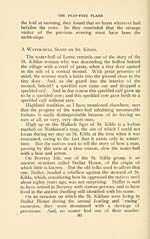 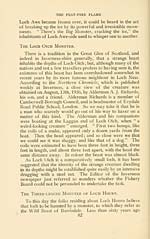 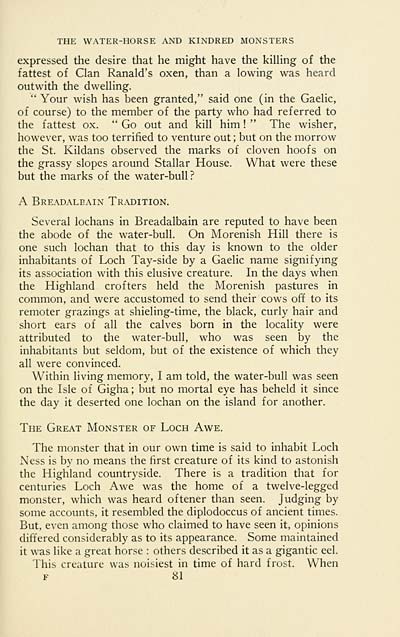 THE WATER-HORSE AND KINDRED MONSTERS
expressed the desire that he might have the kilhng of the
fattest of Clan Ranald's oxen, than a lowing was heard
outwith the dwelling.
" Your wish has been granted," said one (in the Gaelic,
of course) to the member of the party who had referred to
the fattest ox. " Go out and kill him ! " The wisher,
however, was too terrified to venture out ; but on the morrow
the St. Kildans observed the marks of cloven hoofs on
the grassy slopes around Stallar House. What were these
but the marks of the water-bull ?
A Breadaleain Tradition.
Several lochans in Breadalbain are reputed to have been
the abode of the water-bull. On Morenish Hill there is
one such lochan that to this day is known to the older
inhabitants of Loch Tay-side by a Gaelic name signifymg
its association with this elusive creature. In the days when
the Highland crofters held the Morenish pastures in
common, and were accustomed to send their cows off to its
remoter grazings at shieling-time, the black, curly hair and
short ears of all the calves born in the locality were
attributed to the water-bull, who was seen by the
inhabitants but seldom, but of the existence of which they
all were convinced.
Within living memory, I am told, the water-bull was seen
on the Isle of Gigha; but no mortal eye has beheld it since
the day it deserted one lochan on the island for another.
The Great Monster of Loch Awe.
The monster that in our own time is said to inhabit Loch
Ness is by no means the first creature of its kind to astonish
the Highland countryside. There is a tradition that for
centuries Loch Awe was the home of a twelve-legged
monster, which was heard oftener than seen. Judging by
some accounts, it resembled the diplodoccus of ancient times.
But, even among those who claimed to have seen it, opinions
differed considerably as to its appearance. Some maintained
it was like a great horse : others described it as a gigantic eel.
This creature was noisiest in time of hard frost. When
F 81