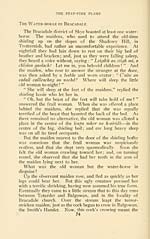 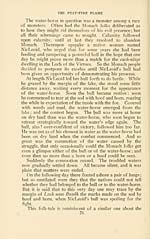 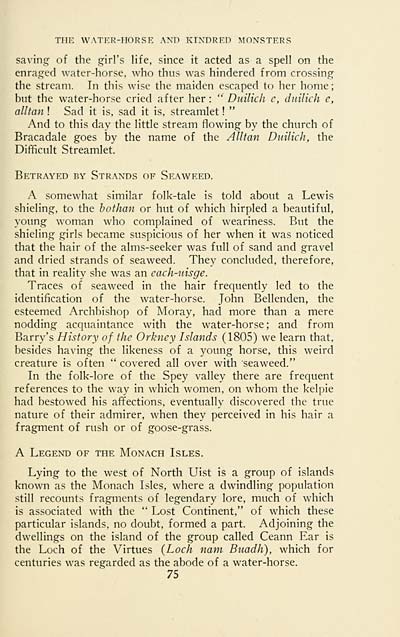 TEE WATER-HORSE AND KINDRED MONSTERS
saving of the girl's life, since it acted as a spell on the
enraged water-horse, who thus was hindered from crossing
the stream. In this wise the maiden escaped to her home ;
but the water-horse cried after her : " DuilicJi c, duilich e,
alltan ! Sad it is, sad it is, streamlet ! "
And to this day the little stream flowing by the church of
Bracadale goes by the name of the AUfan Duilich, the
Difficult Streamlet.
Betrayed by StRx\nds of Seaweed.
A somewhat similar folk-tale is told about a Lewis
shieling, to the hothan or hut of which hirpled a beautiful,
young woman who complained of weariness. But the
shieling girls became suspicious of her when it was noticed
that the hair of the alms-seeker was full of sand and gravel
and dried strands of seaweed. They concluded, therefore,
that in reality she was an each-nisge.
Traces of seaweed in the hair frequently led to the
identification of the water-horse. John Bellenden, the
esteemed Archbishop of Moray, had more than a mere
nodding acquaintance with the water-horse ; and from
Barry's History of the Orkney Islands (1805) we learn that,
besides having the likeness of a young horse, this weird
creature is often " covered all over with seaweed."
In the folk-lore of the Spey valley there are frequent
references to the way in which women, on whom the kelpie
had bestowed his affections, eventually discovered the true
nature of their admirer, when they perceived in his hair a
fragment of rush or of goose-grass.
A Legend of the Monach Isles.
Lying to the west of North Uist is a group of islands
known as the Monach Isles, where a dwindling population
still recounts fragments of legendary lore, much of which
is associated with the " Lost Continent," of which these
particular islands, no doubt, formed a part. Adjoining the
dwellings on the island of the group called Ceann Ear is
the Loch of the Virtues (Loch nam Buadh), which for
centuries was regarded as the abode of a water-horse.
75