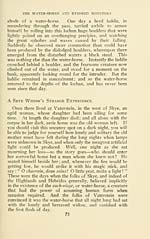 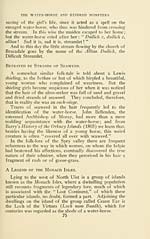 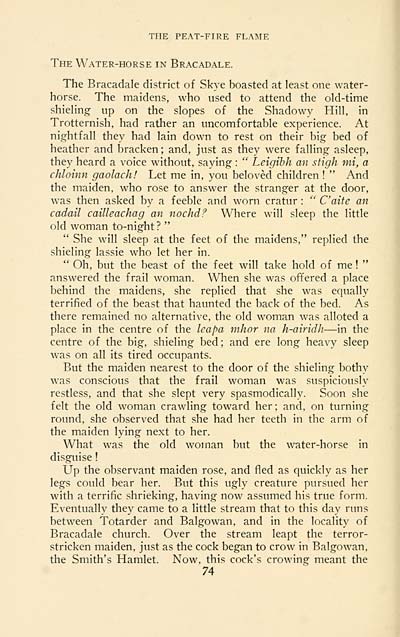 the peat-fire flame
The Water-horse in Bracadale.
The Bracadale district of Skye boasted at least one water-
horse. The maidens, who used to attend the old-time
shieling up on the slopes of the Shadowy Hill, in
Trotternish, had rather an uncomfortable experience. At
nightfall they had lain down to rest on their big bed of
heather and bracken ; and, just as they were falling asleep,
they heard a voice without, saying : " Leigibh an stigh mi, a
chloinn gaolach! Let me in, you beloved children ! " And
the maiden, who rose to answer the stranger at the door,
was then asked by a feeble and worn cratur : " C'aite an
cadail cailleachag an nochd? Where will sleep the little
old woman to-night? "
" She will sleep at the feet of the maidens," replied the
shieling lassie who let her in.
" Oh, but the beast of the feet will take hold of me ! "
answered the frail woman. When she was offered a place
behind the maidens, she replied that she was equally
terrified of the beast that haunted the back of the bed. As
there remained no alternative, the old woman was alloted a
place in the centre of the Icapa mhor na h-airidlt — in the
centre of the big, shieling bed ; and ere long heavy sleep
was on all its tired occupants.
But the maiden nearest to the door of the shieling bothy
was conscious that the frail woman was suspiciously
restless, and that she slept very spasmodically. Soon she
felt the old woman crawling toward her; and, on turning
round, she observed that she had her teeth in the arm of
the maiden lying next to her.
What was the old woman but the water-horse in
disguise !
Up the observant maiden rose, and fled as quickly as her
legs could bear her. But this ugly creature pursued her
with a terrific shrieking, having now assumed his true form.
Eventually they came to a little stream that to this day runs
between Totarder and Balgowan, and in the locality of
Bracadale church. Over the stream leapt the terror-
stricken maiden, just as the cock began to crow in Balgowan,
the Smith's Hamlet. Now, this cock's crowing meant the
74