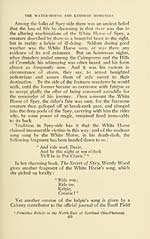 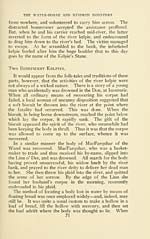 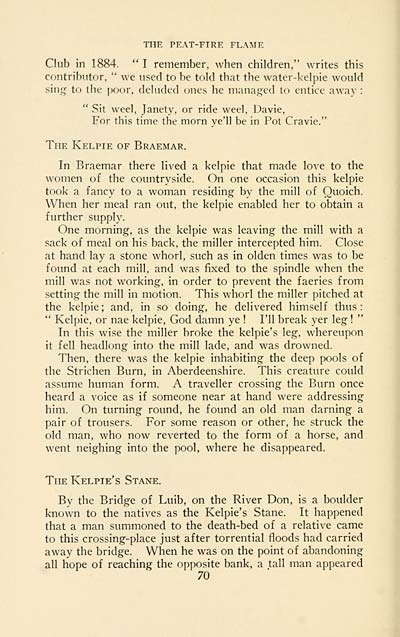 THE PEAT-FIRE FLAME
Club in 1884. " I remember, when children," writes this
contributor, " we used to be told that the water-kelpie would
sing to the poor, deluded ones he managed to entice away :
" Sit weel, Janety, or ride weel, Davie,
For this time the morn ye'll be in Pot Cravie."
The Kelpie of Braemar.
In Braemar there lived a kelpie that made love to the
women of the countryside. On one occasion this kelpie
took a fancy to a woman residing by the mill of Ouoich.
When her meal ran out, the kelpie enabled her to obtain a
further supply.
One morning, as the kelpie was leaving the mill with a
sack of meal on his back, the miller intercepted him. Close
at hand lay a stone whorl, such as in olden times was to be
found at each mill, and was fixed to the spindle when the
mill was not working, in order to prevent the faeries from
setting the mill in motion. This whorl the miller pitched at
the kelpie; and, in so doing, he delivered himself thus:
" Kelpie, or nae kelpie, God damn ye ! I'll break yer leg ! "
In this wise the miller broke the kelpie's leg, whereupon
it fell headlong into the mill lade, and was drowned.
Then, there was the kelpie inhabiting the deep pools of
the Strichen Burn, in Aberdeenshire. This creature could
assume human form. A traveller crossing the Burn once
heard a voice as if someone near at hand were addressing
him. On turning round, he found an old man darning a
pair of trousers. For some reason or other, he struck the
old man, who now reverted to the form of a horse, and
went neighing into the pool, where he disappeared.
The Kelpie's Stane.
By the Bridge of Luib, on the River Don, is a boulder
known to the natives as the Kelpie's Stane. It happened
that a man summoned to the death-bed of a relative came
to this crossing-place just after torrential floods had carried
away the bridge. When he was on the point of abandoning
all hope of reaching the opposite bank, a tall man appeared
70