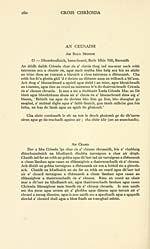 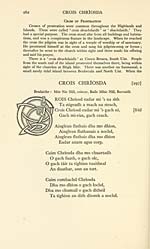 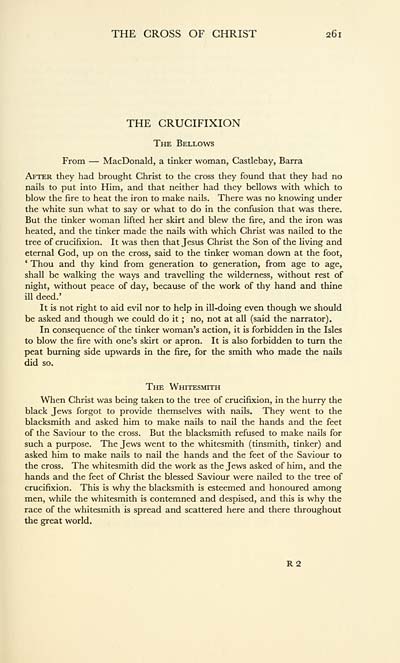 THE CROSS OF CHRIST 261
THE CRUCIFIXION
The Bellows
From — MacDonald, a tinker woman, Castlebay, Barra
After they had brought Christ to the cross they found that they had no
nails to put into Him, and that neither had they bellows with which to
blow the fire to heat the iron to make nails. There was no knowing under
the white sun what to say or what to do in the confusion that was there.
But the tinker woman lifted her skirt and blew the fire, and the iron was
heated, and the tinker made the nails with which Christ was nailed to the
tree of crucifixion. It was then that Jesus Christ the Son of the living and
eternal God, up on the cross, said to the tinker woman down at the foot,
* Thou and thy kind from generation to generation, from age to age,
shall be walking the ways and travelling the wilderness, without rest of
night, without peace of day, because of the work of thy hand and thine
ill deed.'
It is not right to aid evil nor to help in ill-doing even though we should
be asked and though we could do it ; no, not at all (said the narrator).
In consequence of the tinker woman's action, it is forbidden in the Isles
to blow the fire with one's skirt or apron. It is also forbidden to turn the
peat burning side upwards in the fire, for the smith who made the nails
did so.
The Whitesmith
When Christ was being taken to the tree of crucifixion, in the hurry the
black Jews forgot to provide themselves with nails. They went to the
blacksmith and asked him to make nails to nail the hands and the feet
of the Saviour to the cross. But the blacksmith refused to make nails for
such a purpose. The Jews went to the whitesmith (tinsmith, tinker) and
asked him to make nails to nail the hands and the feet of the Saviour to
the cross. The whitesmith did the work as the Jews asked of him, and the
hands and the feet of Christ the blessed Saviour were nailed to the tree of
crucifixion. This is why the blacksmith is esteemed and honoured among
men, while the whitesmith is contemned and despised, and this is why the
race of the whitesmith is spread and scattered here and there throughout
the great world.
R2