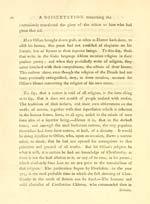 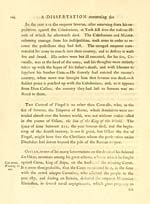 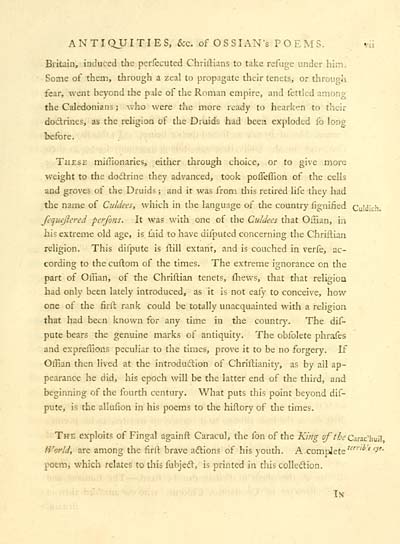 A N T I CVU I T I E S, 6:c. of O S S I AN's POEMS. vii
Britain, induced the perfecuted Chrilllans to take refuge under him.
Some of thein, through a zeal to propagate their tenets, or througa
fear, went beyond the pale of the Roman empire, and fettled among
the Caledonians ; \vho were the more ready to hearken to their
dodrines, as the religion of the Druids had been exploded fo long-
before.
These milTionaries, either through choice, or to give more
weight to the dodlrine they advanced, took pofTeflion of the cells
and groves of the Druids ; and it was from, this retired life they had
the name of Culdees, which in the language of the country fignified Culdich.
Jequejicred perfons. It was with one of the Culdees that Oi3ian, in
his extreme old age, is laid to have difputed concerning the Chriftian
religion. This difpute is ftill extant, and is couched in verfe, ac-
cording to the cuflom of the times. The extreme ignorance on the
part of Offian, of the Chriftian tenets, fliews, that tlaat religion
had only been lately introduced, as it is not eaU' to conceive, how
one of the firll rank could be totally unacquainted with a religion
that had been known for any time in the country. The dif-
pute bears the genuine marks of antiquity. The obfolete phrafes
and expreffions peculiar to the times, prove it to be no forgery. If
Offian then lived at the introduftion of Chriftianity, as by all ap-
pearance he did, his epoch will be the latter end of the third, and
beginning of the fourth century. What puts this point beyond dif-
pute, is the allufion in his poems to the hiftory of tlie times.
The exploits of Fingal againft Caracul, the fon of the King ^/'^/^t'Carac'huil
World, are among the firll: brave aftions of his youth. A compJete '^'"''^ ' '^''''
poem, which relates to this fubje(51:, is printed in this colledion.
In