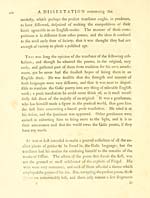 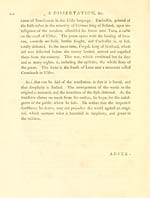 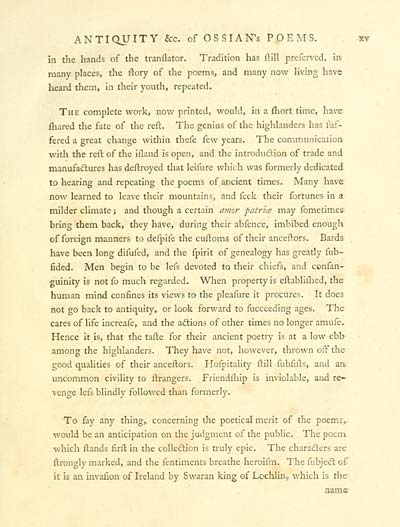 ANTIQUITY &c. of OSSIAN's POEMS. xv
in the hands of the tranflator. Tradition has flill preferved, in
many places, the ftory of the poems, and many now living have
heard them, in their youth, repeated.
The complete work, now printed, would, in a fliort time, have
fhared the fate of the reft. The genius of the highknders has fuf-
fered a great change within thefe few years. The communication
with the reft of the ifland is open, and the introduftion of trade and
manufa<flures has deftroyed that leifure which was formerly dedicated
to hearing and repeating the poems of ancient times. Many have
now learned to leave their mountains, and feek their fortunes in a
milder climate j and though a certain amor patrice may fometimes
bring them back, they have, during their abfence, imbibed enough
of foreign manners to defpife the cuftoms of their anceftors. Bards
have been long difufed, and the fpirit of genealogy has greatly fub-
fided. Men bedn to be lefs devoted to their chiefs, and confan-
guinity is not fo much regarded. When property is eftablifhed, the
human mind confines its views to the pleafure it procures. It does
not go back to antiquity, or look forward to fucceeding ages. The
cares of life increafe, and the adtions of other times no longer amufe.
Hence it is, that the tafte for their ancient poetry is at a low ebb
among the highlanders. They have not, however, thrown off the
good qualities of their anceftors. Hofpitality ftill fubfifts, and an-
uncommon civility to ftrangers. Friendihip is inviolable, and re--
venge lefs blindly followed than formerly.
To fay any thing, concerning the poetical merit of the poems,
would be an anticipation on the judgment of the public. The poem-
which ftands firft in the collecftion is truly epic. The charadters are
ftrongly marked, and the fentiments breathe heroifm. The fubjedl of
it is an invalion of Ireland by Swaran king of Lochliny which is the-
name