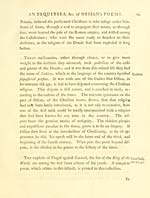 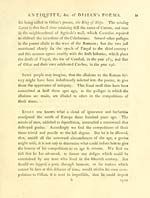 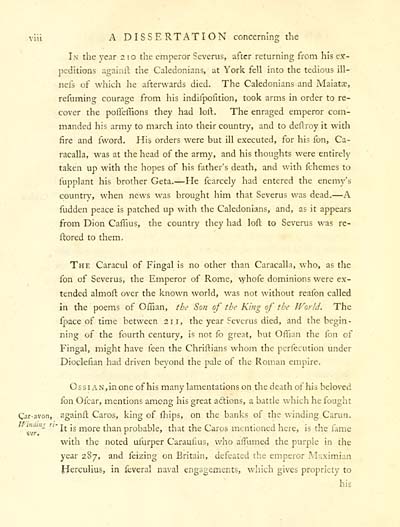 viii A DISSERTATION concerning the
In the year 2 10 the emperor Severus, after returning from his ex-
peditions agciinll the Caledonians, at Yorlc fell into the tedious ill-
nefs of which he afterwards died. The Caledonians and Maiatae,
refuming courage from his indifpofition, took arms in order to re-
cover the polleflions they had loll:. The enraged emperor com-
manded his army to march into their country, and to deflroy it with
fire and fword. His orders were but ill executed, for his fon, Ca-
racalla, was at the head of the army, and his thoughts were entirely
taken up with the hopes of his father's death, and with fchemes to
fupplant his brother Geta. — He fcarcely had entered the enemy's
country, when news was brought him that Severus was dead. — A
fudden peace is patched up with the Caledonians, and, as it appears
from Dion CafTius, the country they had loft to Severus was re-
ftored to them.
The Caracul of Fingal is no other than Caracalla, who, as the
fon of Severus, the Emperor of Rome, \yhofe dominions were ex-
tended almoft over the known world, was not without reafon called
in the poems of OlTian, the Son of the King of the World. The
fpace of time between 211, the year Severus died, and the begin-
ning of the fourth century, is not fo great, but Offian the fon of
Fingal, might have (ttn the Chriftians whom the pcrfecution under
Dioclefian had driven beyond the pale of the Roman empire.
OssiANjinone of his many lamentations on the death of his beloved
fon Ofcar, mentions among his great actions, a battle which he fought
Car-avon, againft Caros, king of fhips, on the banks of the winding Carun.
wMiij^ "• i^ jg more than probable, that the Caros mentioned here, is the fame
with the noted ufurper CarauHus, who alfumed the purple in the
year 287, and feizing on Britain, defeated the emperor Mr.ximian
flerculius, in feveral na\al engagements, wliich gives propriety to
his