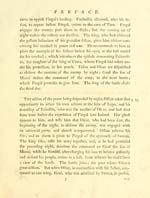 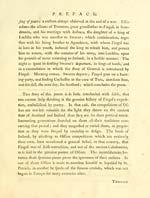 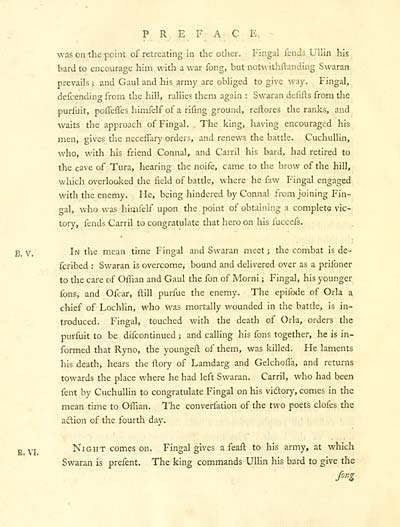 PREFACE.
wason thepoiiJt of retreating in the other. Fingal lends UUin his
bard to encourage him with a war fong, but nctwithftanding Swaran
prevails; and Gaul and his army are obliged to give way. Fingal,
defcending from the hill, rallies them again : Swaran defifts from the
purfuit, pofleffes himfelf of a rifing ground, reltores the ranks, and
waits the approach of Fingal. The king, having encouraged his
men, gives the neceffary orders, and renews the battle. Cuchullin,
who, with his friend Connal, and Carril his bard, had retired to
the cave of Tura, hearing the nolfe, came to the brow of the hill,
which overlooked the field of battle, where he faw Fingal engaged
with the enemy. He, being hindered by Connal from joining Fin-
gal, who was himfelf upon the point of obtaining a complete vic-
tory, fends Carril to congratulate that hero on his fuccefs.
g_ y^ In the mean time Fingal and Swaran meet ; the combat is de-
fcribed : Swaran is overcome, bound and delivered over as a prifoner
to the care of Offian and Gaul the fon of Morni ; Fingal, his younger
fons, and Ofcar, ftill purfue the enemy. The epifode of Orla a
chief of Lochlin, who was mortally wounded In the battle, is in-
troduced. Fingal, touched with the death of Orla, orders the
purfuit to be difcontinued ; and calling his fons together, he is in-
formed that Ryno, the youngell of them, was killed. He laments
his death, hears the ftory of Lamdarg and Gelchofia, and returns
towards the place where he had left Swaran. Carril, who had been
fent by Cuchullin to congratulate Fingal on his vidory, comes in the
mean time to Oflian. The converlation of the two poets clofes the
adlion of the fourth day.
B. VI.
Night comes on. Fingal gives a feaft to his army, at which
Swaran is prefent. The king commands UUin his bard to give the