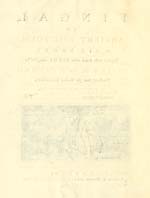 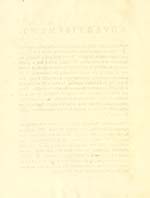 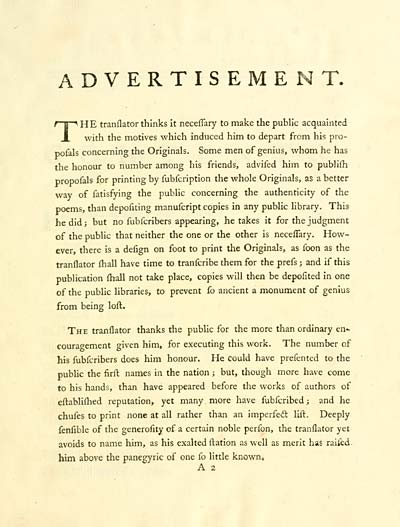 ADVERTISEMENT.
THE tranflator thinks It necefTary to make the public acquainted
with the motives which induced him to depart from his pro-
pofals concerning the Originals. Some men of genius, whom he has
the honour to number among his friends, advifed him to publifh
propofals for printing by fubfcription the whole Originals, as a better
way of fatisfying the public concerning the authenticity of the
poems, than depofiting manufcript copies in any public library. This^
he did ; but no fubfcribers appearing, he takes it for the judgment
of the public that neither the one or the other is neceflary. How-
ever, there is a defign on foot to print the Originals, as foon as the
tranflator fliall have time to tranfcribe them for the prefs ; and if this
publication fhall not take place, copies will then be depofited in one
of the public libraries, to prevent fo ancient a monument of genius
from being loft.
The tranflator thanks the public for the more than ordinary en-
couragement given him, for executing this work. The number of
his fubfcribers does him honour. He could have prefented to the
public the firft names in the nation ; but, though more have come
to his hands, than have appeared before the works of authors of
eftabliflied reputation, yet many more have fubfcribed ; and he
chufes to print none at all rather than an imperfed: lift. Deeply
fenfible of the generofity of a certain noble perfon, the tranflator yet
avoids to name him, as his exalted ftation as well as merit has raiied.
him above the panegyric of one fo little known,
A 2