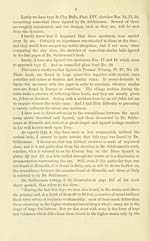 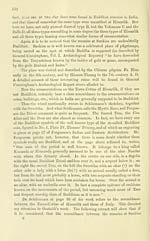 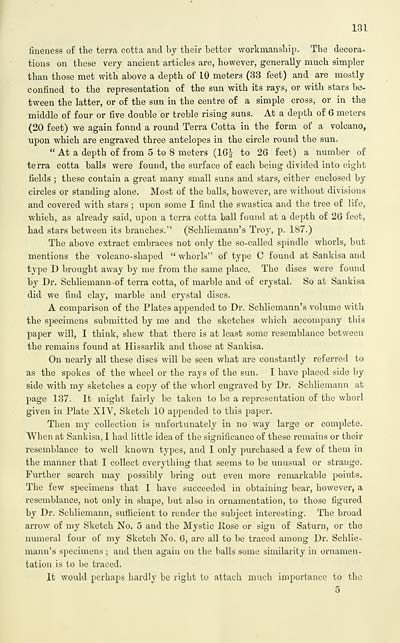 131
fiueness of the ter^a cotta and by their better workmanship. The decora-
tions on these very ancient articles are, however, generally much simpler
than those met with above a depth of 10 meters (33 feet) and are mostly
confined to the representation of the sun with its rays, or with stars be-
tween the latter, or of the sun in the centre of a simple cross, or in the
middle of four or five double or treble rising suns. At a depth of 6 meters
(20 feet) we again fonnd a round Terra Cotta in the form of a volcano,
upon which are engraved three antelopes in the circle round the sun,
" At a depth of from 5 to 8 meters (16^ to 26 feet) a number of
terra cotta balls were found, the surface of each being divided into eight
fields ; these contain a great many small suns and stars, either enclosed by
circles or standing alone. Most of the balls, however, are without divisions
and covered with stars ; upon some I find the swastica and the tree of life,
which, as already said, upon a terra cotta ball found at a depth of 26 feet,
had stars between its branches." (Schliemann's Troy, p. 187.)
The above extract embraces not only the so-called spindle whorls, but
mentions the volcano-shaped " whorls" of type C found at Sankisa and
type D brought away by me from the same place. The discs were found
by Dr. Schliemann of terra cotta, of marble and of crystal. So at Sankisa
did we find clay, marble and crystal discs.
A comparison of the Plates appended to Dr. Schliemann's volume with
the specimens submitted by me and the sketches which accompany this
paper will, I think, shew that there is at least some resemblance between
the remains found at Hissarlik and those at Sankisa.
On nearly all these discs will be seen what are constantly referred to
as the spokes of the wheel or the rays of the sun. I have placed side by
side with my sketches a copy of the whorl engraved by Dr. Schliemann at
page 137. It might fairly be taken to be a representation of the whorl
given in Plate XIV, Sketch 10 appended to this paper.
Then my collection is unfortunately in no way large or complete.
When at Sankisa, I had little idea of the significance of these remains or their
resemblance to well known types, and I only purchased a few of them in
the manner that I collect everything that seems to be unusual or strange.
Further search may possibly bring out even more remarkable points.
The few specimens that I have succeeded in obtaining bear, however, a
resemblance, not only in shape, but also in ornamentation, to those figured
by Dr. Schliemann, sufficient to render the subject interesting. The broad
arrow of my Sketch No. 5 and the Mystic Rose or sign of Saturn, or the
numeral four of my Sketch No. 6, are all to be traced among Dr. Schlie-
mann's specimens ; and then again on the balls some similarity in ornamen-
tation is to be traced.
It would perhaps hardly be right to attach much importance to the
5