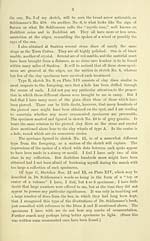 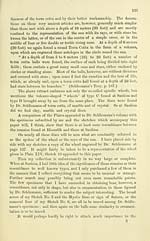 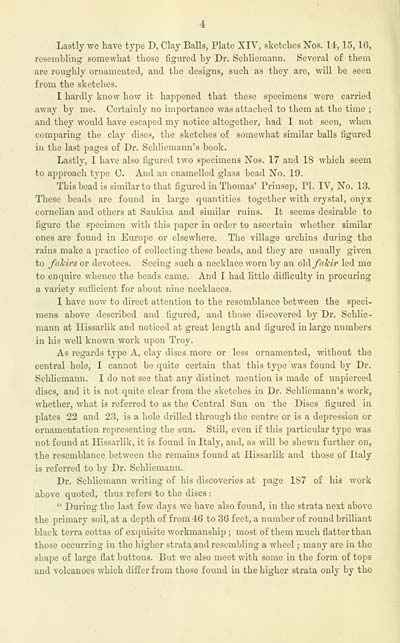 Lastly we have type D, Clay Balls, Plate XIV, sketches Nos. 14, 15, 16,
resembling somewhat those figured by Dr. Schliemami. Several of them
are roughly ornameutecl, and the designs, such as they are, will be seen
from the sketches.
I hardly know how it happened that these specimens were carried
away by me. Certainly no importance was attached to them at the time ;
and they would have escaped my notice altogether, had I not seen, when
comparing the clay discs, the sketches of somewhat similar balls figured
in the last pages of Dr. Schliemann's book.
Lastly, I have also figured two specimens Xos. 17 and 18 which seem
to approach ty^^e C. And an enamelled glass bead No. 19.
This bead is similar to that figured in Thomas' Prinsep, PI. IV, No. 13,
These beads are found in large quantities together with crystal, onyx
cornelian and others at Sankisa and similar ruins. It seems desirable to
figure the specimen with this paper in order to ascertain whether similar
ones are found in Europe or elsewhere. The village urchins during the
rains make a pi'actice of collecting these beads, and they are usually given
to fakirs or devotees. Seeing such a necklace worn by an oldifaTcir led me
to enquire whence the beads came. And I had little difficulty in procuring
a variety sufficient for about nine necklaces.
I have now to direct attention to the resemblance between the speci-
mens above described and figured, and those discovered by Dr. Schlie-
maun at Hissarlik and noticed at great length and figui'ed in large numbers
in his well known work upon Troy.
As regards type A, clay discs more or less ornamented, without the
central hole, I cannot be quite certain that this type was found by Dr.
Schliemami. I do not see that any distinct mention is made of unpierced
discs, and it is not quite clear from the sketches in Dr. Schliemann's work,
whether, what is referred to as the Central Sun on the Discs figured in
plates 22 and 23, is a hole drilled through the centre or is a depression or
ornamentation representing the sun. Still, even if this particular type was
not found at Hissarlik, it is found in Italy, and, as will be shewn further on,
the resembl.ance between the remains found at Hissarlik and those of Italy
is referred to by Dr. Schliemann.
Dr. Schliemann writing of his discoveries at page 187 of his work
above quoted, thus refers to the discs :
" During the last few days we have also found, in the strata next above
the primary soil, at a depth of from 46 to 36 feet, a number of round brilliant
black terra cottas of exquisite workmanship ; most of them much flatter than
those occurring in the liigher strata and resembling a wheel ; many are in the
shape of large flat buttons. But we also meet with some in the form of tops
and volcanoes which differ from those found in the higher strata only by the