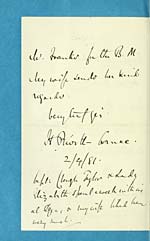 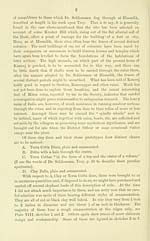 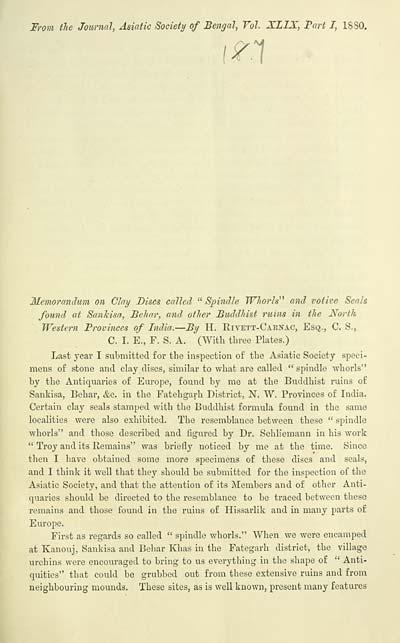 From the Jounial, Asiatic Society of Bengal, Vol XLIX, Fart I, 1S80.
^.1
Memorandum on Clay Discs called " Sjnndie WJiorls" and votive Seals
found at Sankisa, Beliar, and other Buddhist ruins in the North
Western Provinces of India. — By H. Eivett-Carnac, Esq., C. S.,
C. I. E., F. S. A. (With three Plates.)
Last year I submitted for the inspection of the Asiatic Society speci-
mens of stone and clay discs, similar to what are called " spindle whorls"
by the Antiquaries of Europe, found by me at the Buddhist ruins of
Sankisa, Behar, &c. in the Fatebgarh District, N. W. Provinces of India.
Certain clay seals stamped with tbe Buddhist formula found in the same
localities were also exhibited. The resemblance between these " spindle
whorls" and those described and figured by Dr. Schliemann in his work
" Troy and its Remains" was briefly noticed by me at the time. Since
then I bave obtained some more specimens of these discs and seals,
and I think it well that they should be submitted for the inspection of the
Asiatic Society, and that the attention of its Members and of other Anti-
quaries should be directed to the resemblance to be traced between these
remains and those found in the ruins of Hissarlik and in many parts of
Europe.
First as regards so called " spindle whorls." When we were encamped
at Kanouj, Sankisa and Behar Khas in the Fategarh district, the village
urchins were encouraged to bring to us everything in the shape of " Anti-
quities" that could be grubbed out from these extensive ruins and from
neighbouring mounds. These sites, as is well known, present many features