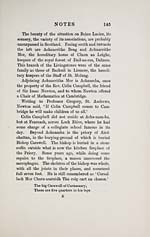 146 NOTES
Upon a high ridge behind the Priory are the
church and burying-ground of St. Baodan, the
patron saint of the parish. A short distance away
in Glen-Salach was a big ice-carried boulder known
as ' Suidhe Bhaodain ' — Baodan's Seat. The boulder
was broken up and carried across the loch to build
a house.
At the foot of Glen-Salach, by the edge of Loch
Etive, is Inver-easragan, the birthplace of Margaret
Campbell, wife of the Rev. John Macaulay and
grandmother of Lord Macaulay, the hater of the
Celt, but the intense Celt withal.
Across Loch Etive stands ' Cruachan Beann,' the
mount of peaks. The names of the separate peaks
are ' Meall nan Each,' ' Meall Copagach,' 'An Stob,'
'An Stob Dearg,' Meall a' Choire Ghlais,' and
'Beinn Bhuiridh.' 'Meall Cuanail' and 'Meall
Tionail ' are alternatives on the third, fourth, and
fifth of these.
Upon the western base of Cruachan, Robert the
Bruce and Macdougal of Lorn fought a battle.
Macdougal was a friend, probably a relative, of
Baliol, and admiral of the western fleet of England.
The battle between Bruce and Macdougal was fierce
and deadly. A part of Bruce's army took Mac-
dougal in the rear. The Macdougals gave way and
fled across the bridge over the Awe. After crossing
they tried to cut down the bridge, but failed, being
too hotly pursued. They got to their ships, how-
ever, and sailed away to England. In passing
Galloway some of the Macdougals and their fol-