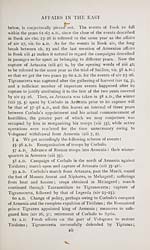 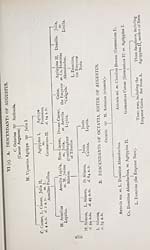 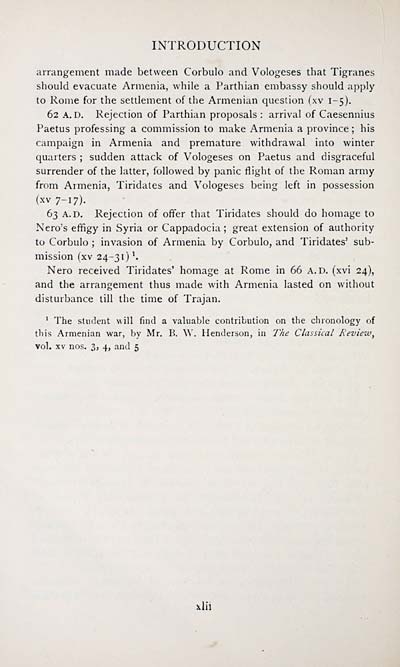 INTRODUCTION
arrangement made between Corbulo and Vologeses that Tigranes
should evacuate Armenia, while a Parthian embassy should apply
to Rome for the settlement of the Armenian question (xv 1-5).
62 A. D. Rejection of Parthian proposals : arrival of Caesennius
Paetus professing a commission to make Armenia a province ; his
campaign in Armenia and premature withdrawal into winter
quarters ; sudden attack of Vologeses on Paetus and disgraceful
surrender of the latter, followed by panic flight of the Roman army
from Armenia, Tiridates and Vologeses being left in possession
(xv 7-17).
63 A.D. Rejection of offer that Tiridates should do homage to
Nero's efifigy in Syria or Cappadocia ; great extension of authority
to Corbulo ; invasion of Armenia by Corbulo, and Tiridates' sub-
mission (xv 24-31)'.
Nero received Tiridates' homage at Rome in 66 a.d. (xvi 24),
and the arrangement thus made with Armenia lasted on without
disturbance till the time of Trajan.
' The student will find a valuable contribution on the chronology of
this Armenian war, by Mr. B. W. Henderson, in The Classical Review,
vol. XV nos. 3, 4, and 5
xlii