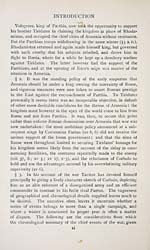 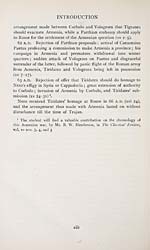 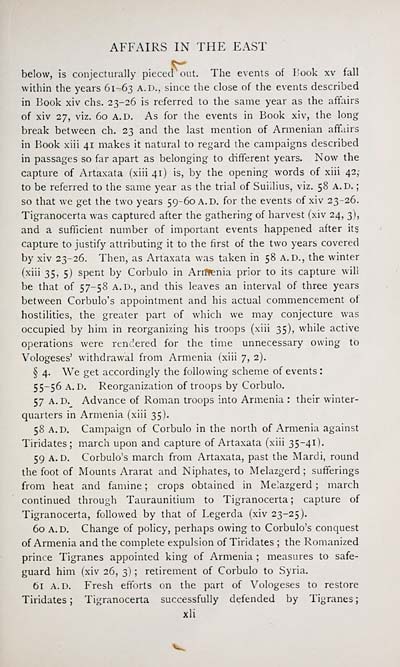 AFFAIRS IN THE EAST
below, is conjecturally pieced out. The events of Book xv fall
within the years 61-63 A.D., since the close of the events described
in Book xiv chs. 23-26 is referred to the same year as the affairs
of xiv 27, viz. 60 A.D. As for the events in Book xiv, the long
break between ch. 23 and the last mention of Armenian affairs
in Book xiii 41 makes it natural to regard the campaigns described
in passages so far apart as belonging to different years. Now the
capture of Artaxata (xiii 41) is, by the opening words of xiii 42,-
to be referred to the same year as the trial of SuiJlius, viz. 58 A.D. ;
so that we get the two years 59-60 A.D. for the events of xiv 23-26.
Tigranocerta was captured after the gathering of harvest (xiv 24, 3),
and a sufficient number of important events happened after it;
capture to justify attributing it to the first of the two years covered
by xiv 23-26. Then, as Artaxata was taken in 58 A.D., the winter
(xiii 35, s) spent by Corbulo in Arrffcnia prior to its capture will
be that of 57-58 A.D., and this leaves an interval of three years
between Corbulo's appointment and his actual commencement of
hostilities, the greater part of which we may conjecture was
occupied by him in reorganizing his troops (xiii 35), while active
operations were rendered for the time unnecessary owing to
Vologeses' withdrawal from Armenia (xiii 7, 2).
§ 4. We get accordingly the following scheme of events :
55-56 A.D. Reorganization of troops by Corbulo.
57 A. D. Advance of Roman troops into Armenia : their winter-
quarters in Armenia (xiii 35).
58 A.D. Campaign of Corbulo in the north of Armenia against
Tiridates; march upon and capture of Artaxata (xiii 35-41)-
59 A.D. Corbulo's march from Artaxata, past the Mardi, round
the foot of Mounts Ararat and Niphates, to Melazgerd ; sufferings
from heat and famine ; crops obtained in Melazgerd ; march
continued through Tauraunitium to Tigranocerta; capture of
Tigranocerta, followed by that of Legerda (xiv 23-25).
60 A.D. Change of policy, perhaps owing to Corbulo's conquest
of Armenia and the complete expulsion of Tiridates ; the Romanized
prince Tigranes appointed king of Armenia ; measures to safe-
guard him (xiv 26, 3) ; retirement of Corbulo to Syria.
61 A.D. Fresh efforts on the part of Vologeses to restore
Tiridates; Tigranocerta successfully defended by Tigranes;