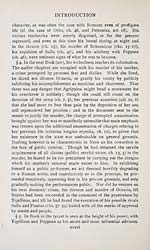 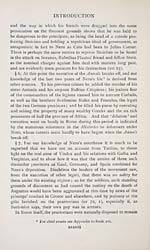 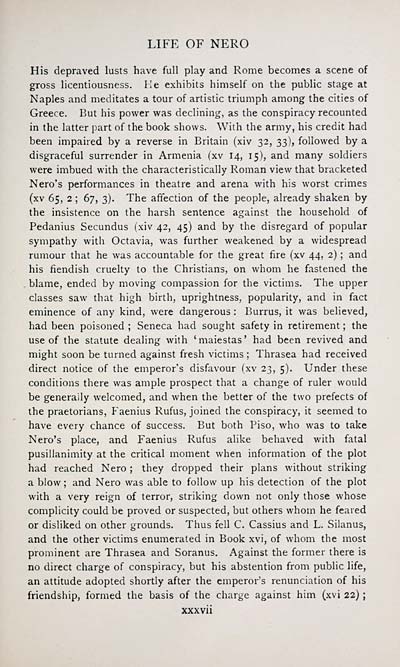 LIFE OF NERO
His depraved lusts have full play and Rome becomes a scene of
gross licentiousness. He exhibits himself on the public stage at
Naples and meditates a tour of artistic triumph among the cities of
Greece. But his power was declining, as the conspiracy recounted
in the latter part of the book shows. With the army, his credit had
been impaired by a reverse in Britain (xiv 32, 33), followed by a
disgraceful surrender in Armenia (xv 14, 15), and many soldiers
were imbued with the characteristically Roman view that bracketed
Nero's performances in theatre and arena with his worst crimes
(xv 65, 2 ; 67, 3). The affection of the people, already shaken by
the insistence on the harsh sentence against the household of
Pedanius Secundus {xW 42, 45) and by the disregard of popular
sympathy with Octavia, was further weakened by a widespread
rumour that he was accountable for the great fire (xv 44, 2) ; and
his fiendish cruelty to the Christians, on whom he fastened the
blame, ended by moving compassion for the victims. The upper
classes saw that high birth, uprightness, popularity, and in fact
eminence of any kind, were dangerous : Burrus, it was believed,
had been poisoned ; Seneca had sought safety in retirement ; the
use of the statute dealing with 'maiestas' had been revived and
might soon be turned against fresh victims ; Thrasea had received
direct notice of the emperor's disfavour (xv 23, 5). Under these
conditions there was ample prospect that a change of ruler would
be generally welcomed, and when the better of the two prefects of
the praetorians, Faenius Rufus, joined the conspiracy, it seemed to
have every chance of success. But both Piso, who was to take
Nero's place, and Faenius Rufus alike behaved with fatal
pusillanimity at the critical moment when information of the plot
had reached Nero ; they dropped their plans without striking
a blow ; and Nero was able to follow up his detection of the plot
with a very reign of terror, striking down not only those whose
complicity could be proved or suspected, but others whom he feared
or disliked on other grounds. Thus fell C. Cassius and L. Silanus,
and the other victims enumerated in Book xvi, of whom the most
prominent are Thrasea and Soranus. Against the former there is
no direct charge of conspiracy, but his abstention from public life,
an attitude adopted shortly after the emperor's renunciation of his
friendship, formed the basis of the charge against him (xvi 22) ;
xxxvii