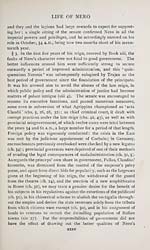 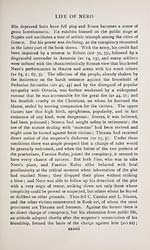 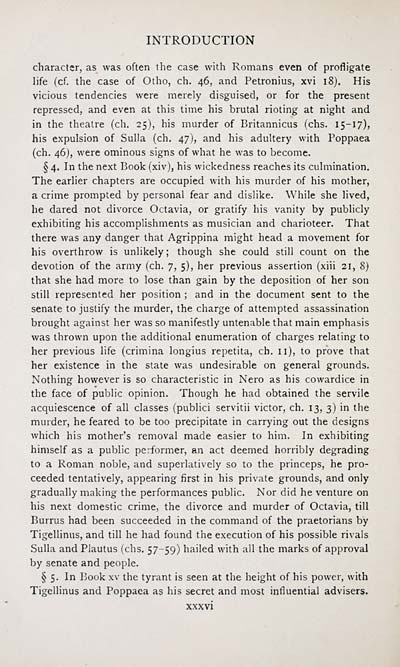 INTRODUCTION
character, as was often the case with Romans even of profligate
life (of. the case of Otho, ch. 46, and Petronius, xvi 18). His
vicious tendencies were merely disguised, or for the present
repressed, and even at this time his brutal rioting at night and
in the theatre (ch. 25), his murder of Britannicus (chs. 15-17),
his expulsion of Sulla (ch. 47), and his adultery with Poppaea
(ch. 46), were ominous signs of what he was to become.
§ 4. In the next Book (xiv), his wickedness reaches its culmination.
The earlier chapters are occupied with his murder of his mother,
a crime prompted by personal fear and dislike. While she lived,
he dared not divorce Octavia, or gratify his vanity by publicly
exhibiting his accomplishments as musician and charioteer. That
there was any danger that Agrippina might head a movement for
his overthrow is unlikely; though she could still count on the
devotion of the army (ch. 7, 5), her previous assertion (xiii 21, 8)
that she had more to lose than gain by the deposition of her son
still represented her position ; and in the document sent to the
senate to justify the murder, the charge of attempted assassination
brought against her was so manifestly untenable that main emphasis
was thrown upon the additional enumeration of charges relating to
her previous life (crimina longius repetita, ch. 11), to prove that
her existence in the state was undesirable on general grounds.
Nothing however is so characteristic in Nero as his cowardice in
the face of public opinion. Though he had obtained the servile
acquiescence of all classes (publici servitii victor, ch. 13, 3) in the
murder, he feared to be too precipitate in carrying out the designs
which his mother's removal made easier to him. In exhibiting
himself as a public performer, an act deemed horribly degrading
to a Roman noble, and superlatively so to the princeps, he pro-
ceeded tentatively, appearing first in his private grounds, and only
gradually making the performances public. Nor did he venture on
his next domestic crime, the divorce and murder of Octavia, till
Burrus had been succeeded in the command of the praetorians by
Tigellinus, and till he had found the execution of his possible rivals
Sulla and Plautus (chs. 57-59) hailed with all the marks of approval
by senate and people.
§ 5. In Book XV the tyrant is seen at the height of his power, with
Tigellinus and Poppaea as his secret and most influential advisers,
xxxvi