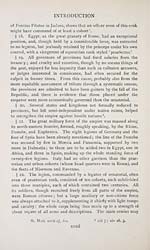 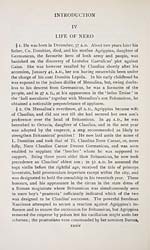 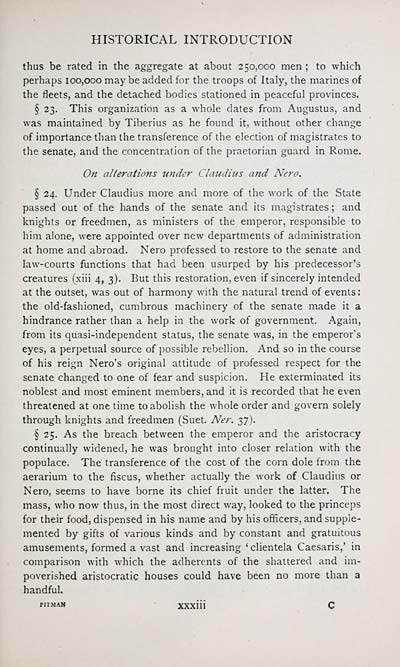 HISTORICAL INTRODUCTION
thus be rated in the aggregate at about 250,000 men ; to which
perhaps 100,000 may be added for the troops of Italy, the marines of
the fleets, and the detached bodies stationed in peaceful provinces.
§ 23. This organization as a whole dates from Augustus, and
was maintained by Tiberius as he found it, without other change
of importance than the transference of the election of magistrates to
the senate, and the concentration of the praetorian guard in Rome.
On alterations under Claudius and Nero.
§ 24. Under Claudius more and more of the work of the State
passed out of the hands of the senate and its magistrates ; and
knights or freedmen, as ministers of the emperor, responsible to
him alone, were appointed over new departments of administration
at home and abroad. Nero professed to restore to the senate and
law-courts functions that had been usurped by his predecessor's
creatures (xiii 4, 3). But this restoration, even if sincerely intended
at the outset, was out of harmony with the natural trend of events :
the old-fashioned, cumbrous machinery of the senate made it a
hindrance rather than a help in the work of government. Again,
from its quasi-independent status, the senate was, in the emperor's
eyes, a perpetual source of possible rebellion. And so in the course
of his reign Nero's original attitude of professed respect for the
senate changed to one of fear and suspicion. He exterminated its
noblest and most eminent members, and it is recorded that he even
threatened at one time to abolish the whole order and govern solely
through knights and freedmen (Suet. Ner. 37).
§ 25. As the breach between the emperor and the aristocracy
continually widened, he was brought into closer relation with the
populace. The transference of the cost of the corn dole from the
aerarium to the fiscus, whether actually the work of Claudius or
Nero, seems to have borne its chief fruit under the latter. The
mass, who now thus, in the most direct way, looked to the princeps
for their food, dispensed in his name and by his officers, and supple-
mented by gifts of various kinds and by constant and gratuitous
amusements, formed a vast and increasing 'clientela Caesaris,' in
comparison with which the adherents of the shattered and im-
poverished aristocratic houses could have been no more than a
handful.
piTMAS xxxiii C