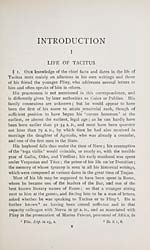 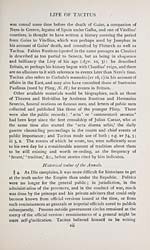 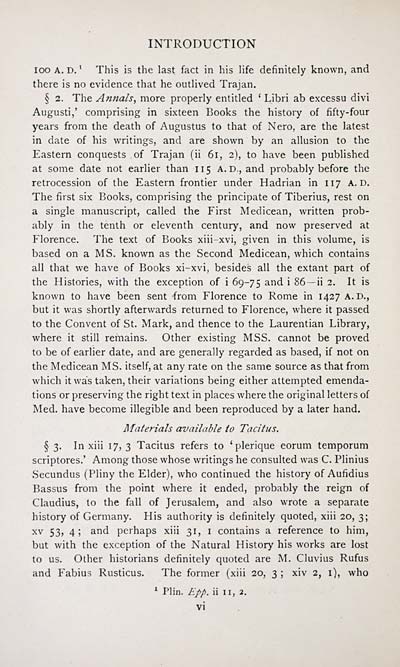 INTRODUCTION
looA.D. ' This is the last fact in his life definitely known, and
there is no evidence that he outlived Trajan.
§ 2. The Annals, more properly entitled ' Libri ab excessu divi
Augusti,' comprising in sixteen Books the history of fifty-four
years from the death of Augustus to that of Nero, are the latest
in date of his writings, and are shown by an allusion to the
Eastern conquests of Trajan (ii 6l, 2), to have been published
at some date not earlier than 1 1 5 A. D., and probably before the
retrocession of the Eastern frontier under Hadrian in 117 A. D.
The first six Books, comprising the principate of Tiberius, rest on
a single manuscript, called the First Medicean, written prob-
ably in the tenth or eleventh century, and now preserved at
Florence. The text of Books xiii-xvi, given in this volume, is
based on a MS. known as the Second Medicean, which contains
all that we have of Books xi-xvi, besides all the extant part of
the Histories, with the exception of i 69-75 and i 86 — ii 2. It is
known to have been sent from Florence to Rome in 1427 A. D.,
but it was shortly afterwards returned to Florence, where it passed
to the Convent of St. Mark, and thence to the Laurentian Library,
where it still remains. Other existing MSS. cannot be proved
to be of earlier date, and are generally regarded as based, if not on
the Medicean MS. itself, at any rate on the same source as that from
which it was taken, their variations being either attempted emenda-
tions or preserving the right text in places where the original letters of
Med. have become illegible and been reproduced by a later hand.
Materials available to Tacitus.
§ 3. In xiii 17, 3 Tacitus refers to 'plerique eorum temporum
scriptores.' Among those whose writings he consulted was C. Plinius
Secundus (Pliny the Elder), who continued the history of Aufidius
Bassus from the point where it ended, probably the reign of
Claudius, to the fall of Jerusalem, and also wrote a separate
history of Germany. His authority is definitely quoted, xiii 20, 3;
XV 53, 4; and perhaps xiii 31, i contains a reference to him,
but with the exception of the Natural History his works are lost
to us. Other historians definitely quoted are M. Cluvius Rufus
and Fabius Rusticus. The former (xiii 20, 3 ; xiv 2, i), who
* Plin. Epp. ii 11, 2.
vi