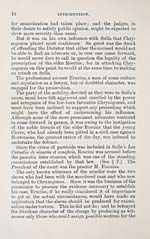 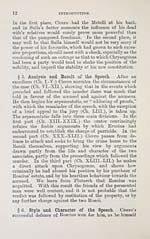 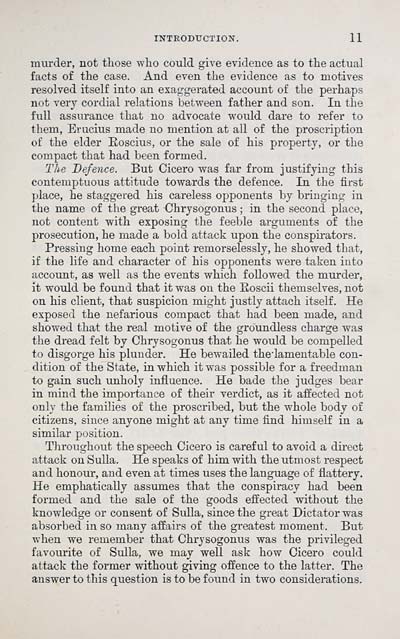 INTRODTJCTION. 11
raixrder, not those wlio could give evidence as to the actual
facts of the case. And even the evidence as to motives
resolved itself into an exaggerated account of the perhaps
not very cordial relations between father and son. In the
full assurance that no advocate would dare to refer to
them, Erucius made no mention at all of the proscription
of the elder Eoscius, or the sale of his property, or the
compact that had been formed.
The Befence. But Cicero was far from justifyiug this
contemptuous attitude towards the defence. In the first
place, he staggered his careless opponents by briuging in
the name of the great Chrysogonus ; in the second place,
not content with exposing the feeble arguments of the
prosecution, he made a bold attack upon the conspirators.
Pressiug home each point remorselessly, he showed that,
if the life and character of his opponents were taken iuto
account, as well as the events which foUowed the murder,
it would be found that it was ou the Eoscii themselves, not
on his client, that suspicion might justly attach itself . He
exposed the nefarious compact that had been made, and
showed that the real motive of the groundless charge was
the dread felt by Chrysogonus that he would be compelled
to disgorge his plunder. He bewailed thedamentable con-
dition of the State, in which it was possible for a freedman
to gain such imholy influence. He bade the judges bear
in mind the importance of their verdict, as it affected not
only the families of the proscribed, but the whole body of
citizens, since anyone might at any time find himself in a
similar position.
Tliroughout the speech Cicero is caref ul to avoid a direct
attack on Sulla. He speaks of him with the utmost respect
and honour, aud even at times uses the language of flattery.
He emphatically assumes that the conspiracy had been
formed and the sale of the goods eifected without the
knowledge or consent of Sulla, since the great Dictator was
absorbed in so many affairs of the greatest moment. But
when we remember that Chrysogonus was the privileged
favourite of Sulla, we may well ask how Cicero could
attack the former without giving offence to the latter. The
answer to this question is to be found in two considerations.