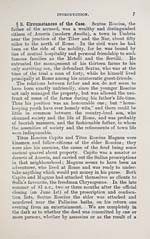 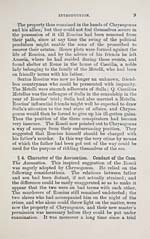 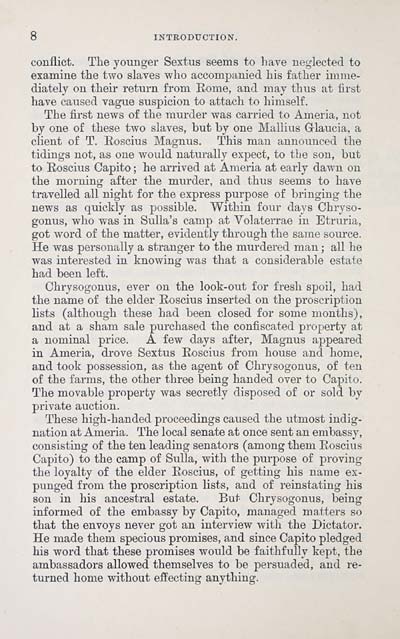 O INTRODtrCTION.
conflict. Tlie youuger Sextus seems to liave neglectecT to
exainine tlie two slaves who accompanied his father imme-
diately on their return from Eome, and may thus at first
have caiised vague suspicion to attach to himself .
The first nevps of the murder was carried to Ameria, not
by one of these two slaves, but by one Mallius Grlaucia, a
client of T. Eoscius Magnus. This mau announced the
tidings not, as one would naturally expect, to tbe son, but
to Roscius Capito ; he arrived at Ameria at early dawn on
the moruing after the murder, and thus seems to have
travelled all night for the express purpose of bringing the
news as quickly as possible. Within four days Chryso-
gonus, who was in Sulla's camp at Volaterrae in Etruria,
got word of the matter, evidently through the same source.
He was persoually a stranger to the murdered man ; all he
was interested in knowing was that a considerable estate
had been left.
Chrysogonus, ever on the look-out for fresh spoil, had
the name of the elder Eoscius inserted on the proscription
lists (although these had been closed for some months),
and at a sham sale purchased the confiscated property at
a nominal price. A few days after, Magnus appeared
in Ameria, drove Sextus Eoscius from house and home,
and took possession, as the agent of Chrysogonus, of ten
of the farms, the other three being handed over to Capito.
The movable property was secretly disposed of or sold by
private auction.
These high-handed proceedings caused the utmost indig-
nation at Ameria. The local senate at once sent an embassy,
consisting of the ten leading senators (among them Eoscius
Capito) to the camp of Sulla, with the purpose of proving
the loyalty of the elder Eoscius, of getting his name ex-
punged from the proscription lists, and of reinstating his
son in his ancestral estate. But Chrysogonus, being
informed of the embassy by Capito, managed matters so
that the envoys never got an interview with the Dictator.
He made them specious promises, and since Capito pledged
his word that these promises would be faithfully kept, the
ambassadors allowed themselves to be persuaded, and re-
turned home without effecting anything.