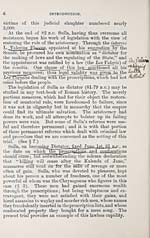 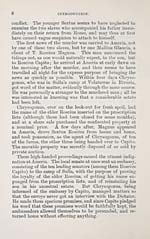 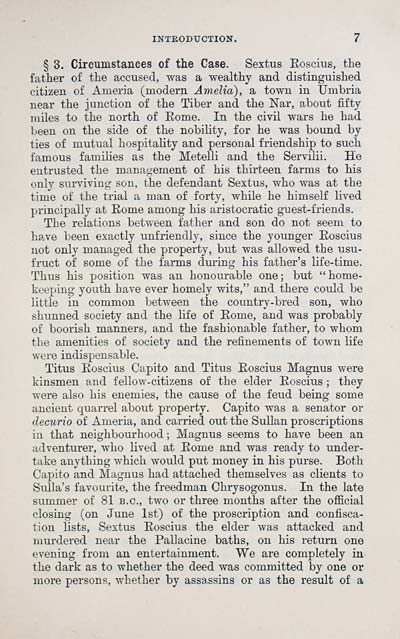 INTRODUCTION. 7
§ 3. Circumstances of the Case. Sextus Eoscius, the
father of tlie accused, was a wealthy and distinguislied
citizen of Ameria (modern Amelia), a town in Umbria
near tlie juuction of the Tiber and the Nar, about fifty
miles to the north of Eome. In the civil wars he had
Ijeeu on the side of the nobility, for he was bound by
ties of mutual hospitality and personal friendship to such
famous families as the Metelli and the Seiwilii. He
entrusted the management of his thirteen farms to his
only suiTiviug son, the defendant Sextus, who was at the
time of the trial a man of forty, while he himself lived
principally at Eome among his aristocratic guest-friends.
The relations between father and son do not seem to
have been exactly unfriendly, since the younger Eoscius
uot only managed the property, but was allowed the usu-
fruct of some of the farms during his father's life-time.
Thus his position was an honourable one; but "home-
keeping youth have ever homely wits," and there could be
little in common between the country-bred son, who
shunned society and the life of Eome, and was probably
of boorish manners, and the fashionable father, to whom
the amenities of society and the refinements of town life
were indispensable.
Titus Eoscius Capito and Titus Eoscius Magnus were
kinsmen and fellow-citizens of the elder Eoscius ; they
were also his enemies, the cause of the feud being some
ancient quarrel about property. Capito was a senator or
demirio of Ameria, and carried out the Sullan proscriptions
in that neighbourhood ; Magnus seems to have been an
adventurer, who lived at Eome and was ready to under-
take anything which wo\ild put money in his purse. Both
Capito and Magnus had attached themselves as clients to
Sulla's favourite, the freedman Chrysogonus. In the late
summer of 81 b.c, two or three months after the ofiicial
closing (on June Ist) of the proscription and confisca-
tion lists, Sextus Eoscius the elder was attacked and
murdered near the Pallacine baths, on his return one
evening froni an entertainment. We are completely in
the dark as to whether the deed was committed by one or
more persons, whether by assassins or as the result of a