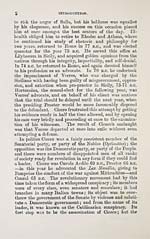 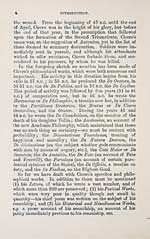 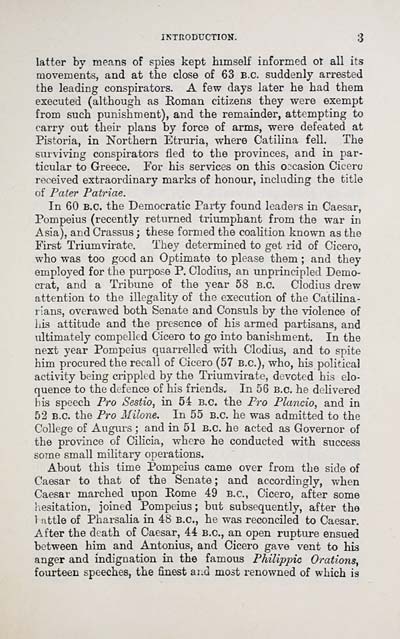 IKTRODUCTIOM. 3
latter by me.ans of spies kept himself informed ot all its
movements, and at the close of 63 b.c. suddenly arrested
the leading conspirators. A few days later he had them
executed (although as Roman citizens they were exempt
from such punishment), and the remainder, attempting to
carry out their plans by force of arms, were defeated at
Pistoria, in Northern Etruria, where Catilina fell. The
surviving conspirators fled to the provinces, and in par-
ticular to Greece. For his services on this occasion Cicero
roceived extraordinary marks of honour, incliiding the title
of Pater Patriae.
In 60 B.c. the Democratic Party found leaders in Caesar,
Pompeius (recently returned triumphant from the war in
Asia), and Crassus ; these formed the coalition known as the
First Triumvirate. They determined to get rid of Cicero,
who was too gocd an Optimate to please them ; and they
employed for the purpose P. Clodius, an unprincipled Demo-
crat, and a Tribune of the year 58 b.c. Clodius drew
attention to the illegality of the execution of the Catilina-
rians, overawed both Senate and Consuls by the violence of
his attitude and the presence of his armed partisans, and
ultimately compelkd Cicero to go into banishment. In the
next year Pompeius quarrelled with Clodius, and to spite
him procured the recall of Cicero (57 B.c), who, his political
activity being crippled by the Triumvirate, dovoted his elo-
quence to the defence of his friends, In 56 B.c. he delivered
his speech Pro Sestio, in 54 B.c. the Pro Plancio, and in
52 B.c. the Pro Milone. In 55 B.c. he was admitted to the
College of Augiu'S ; and in 51 B.c. he acted as Governor of
the province of Cihcia, where he conducted with success
some small mihtary operations.
About this time Pompeius came over from the side of
Caesar to that of the Senate; and accordingly, when
Caesar marched upon Home 49 B.c, Cicero, after some
liesitation, joined Pompeius ; but subsequently, after the
1 fittle of Pharsalia in 48 b.c, he was reconciled to Caesar.
After the death of Caesar, 44 b.c, an open rupture ensued
between him and Antonius, and Cicero gave vent to his
anger and indignation in the famous Philippic Orations,
fourteen speeches, the finest aud most renowned of which is