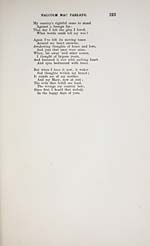 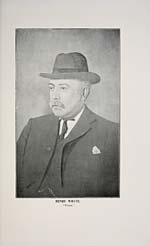 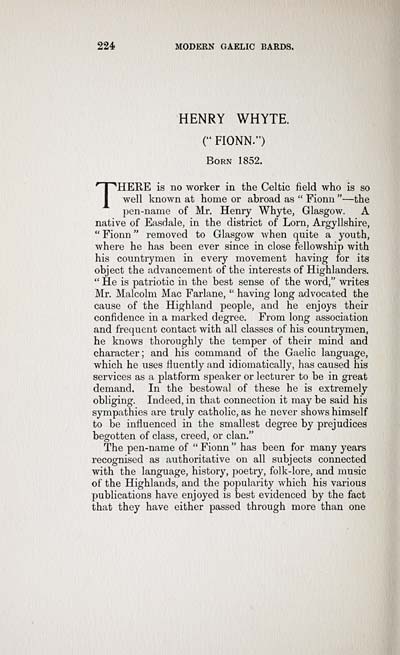 224 MODERN GAELIC BARDS.
HENRY WHYTE.
(" FIONN.")
Born 1852.
THERE is no worker in the Celtic field who is so
well known at home or abroad as " Fionn " — the
pen-name of Mr. Henry Whyte, Glasgow. A
native of Easdale, in the district of Lorn, Argyllshire,
" Fionn " removed to Glasgow when quite a youth,
where he has been ever since in close fellowship with
his countrymen in every movement having for its
object the advancement of the interests of Highlanders.
" He is patriotic in the best sense of the word," writes
Mr, Malcolm Mac Farlane, " having long advocated the
cause of the Highland people, and he enjoys their
confidence in a marked degree. From long association
and frequent contact with all classes of his countrymen,
he knows thoroughly the temper of their mind and
character; and his command of the Gaelic language,
which he uses fluently and idiomatically, has caused his
services as a platform speaker or lecturer to be in great
demand. In the bestowal of these he is extremely
obliging. Indeed, in that connection it may be said his
sympathies are truly catholic, as he never shows himself
to be influenced in the smallest degree by prejudices
begotten of class, creed, or clan."
The pen-name of " Fionn " has been for many years
recognised as authoritative on all subjects connected
with the language, history, poetry, folk-lore, and music
of the Highlands, and the popularity which his various
publications have enjoyed is best evidenced by the fact
that they have either passed through more than one