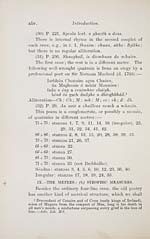 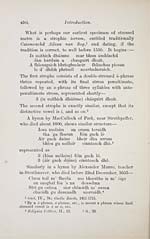 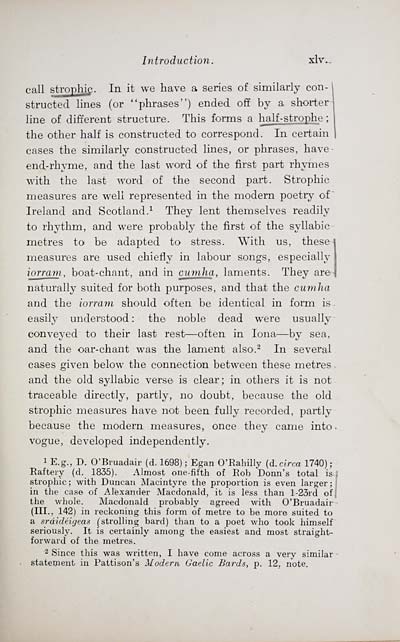 Introduction. xlv..
call stroplaig . In it we have a series of similarly con-
structed lines (or "phrases") ended off by a shorter
line of dift'erent structure. This forms a half-strophe ;
the other half is constructed to correspond. In certain
cases the similarly constructed Hnes, or phrases, have-
end-rhyme, and the last wOTd of the fìrst part rhymes
with the last word of the second part. Strophic
measures are well represented in the modern poetiy of "
Ireland and Scotland.^ They lent themselves readily
to rhythm, and were probably the first of the syllabic
metres to be adapted to stress. With us, these i
measures are used chiefly in labour songs, especially j
iorram, boat-chant, and in cwmha , laments. They aro-j
naturally suited for both purposes, and that the cumha
and the iorravi should often be identical in form is .
easily understood : the noble dead were usually
conveyed to their last rest — often in lona — by sea,
and the oar-chant was the lament also.^ In several
cases given below the connectian between these metres .
and the old syllabic verse is clear; in others it is not
traeeable directly, partly, no doubt, because the old
strophic measures have not been fully recorded, partly
because the modern measures, once they came into -
vogue, developed independently.
1 E.g., D. O'Bruadair (d. 1698) ; Egan O'Rahilly (d. cina 1740) ;
Raftery (d. 1835). Almost one-fifth of Rob Donn's total is ;
strophic ; with Duncan Macintyre the proportion is even larger ;
in the case of Alexander Macdonald, it is less than l-23rd of(
the whole. Macdonald probably agreed with O'Bruadair
(III., 142) in reckonuig this form of metre to be more suited to
a srdìdèìcjeas Cstroning bard) than to a poet who took himself
seriously. It is certainly among the easiest and most straight-
forward of the metres.
2 Since this was written, I have come across a very similar
statement in Pattison's Modeni G'aelic Bards, p. 12, note.