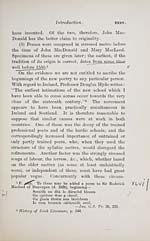 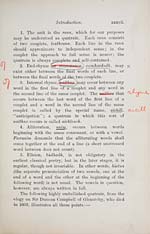 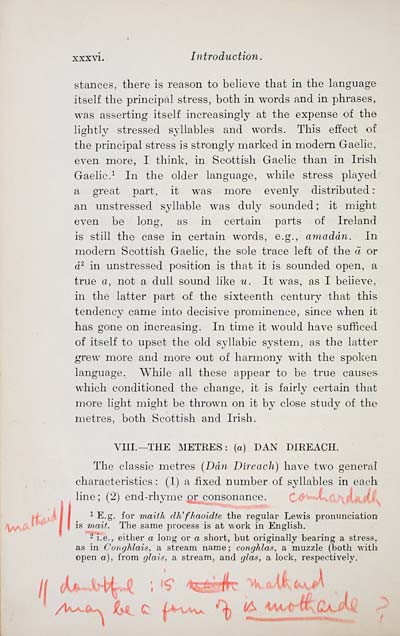 II
xxxvi. Iiitroduction.
stances, there is reason to believe that in the language
itself the principal stress, both in words and in phrases,
was asserting itself increasingly at the expense of the
lightly stressed syllables and words. This effect of
the principal stress is strongly marked in modem Gaehc,
even more, I think, in Scottish Gaelic than in Irish
Gaelic^ In the older language, while stress played
a great part, it was more evenly distributed :
an unstressed syllable was duly sounded ; it might
even be long, as in certain parts of Ireland
is stiil the case in eertain words, e.g., amadàìi. In
modern Scottish Gaelic, the sole trace left of the a or
d^ in unstressed position is that it is sounded open, a
true a, not a duli sound like u. It was, as I beìieve,
in the latter part of the sixteenth century that this
tendency came into decisive prominence, since when it
has gone on increasing. In time it would have sufficed
of itself to upset tlie old syllabic system, as the latter
grew more and more out of harmony with the spoken
language. While all these appear to be true causes
which eonditioned the ehange, it is fairly certain that
more light might be thrown on it by close study of the
metres, both Scottish and Irish.
VIII.— THE METRES: (a) DAN DIREACH.
The classic metres {Ddn Direach) have two general
characteristics : (1) a fìxed number of syllables in each
line; (2) end-rhyme gr eonsonance. ' •
^ E.g. for mailh rlh'ffiaoidte the regular Lewis pronunciation
is mait. The same process is at work in English.
2 ì.e., either a long or a short, but originally bearing a stress,
as in Congldais, a stream name; conghlas, a muzzle (both with
open a), from gla'is, a stream, and (jlas, a lock, respectively.