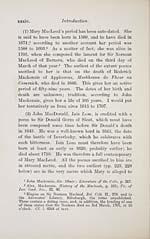 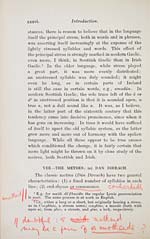 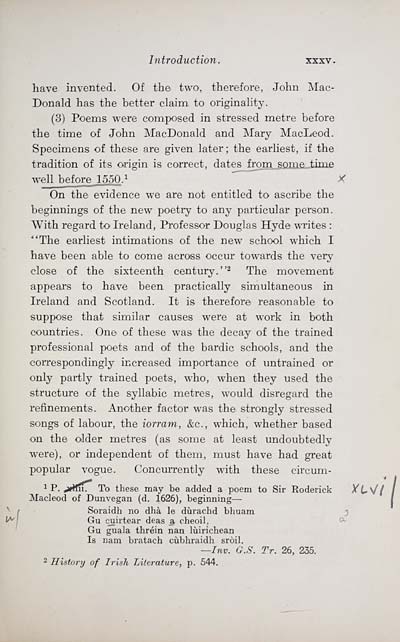 Introduction. xxxv.
have invented. Of the two, therefore, John Mac-
Donald has the better claim to originahty.
(3) Poems were composed in stressed metre before
the time of John MacDonald and Mary MacLeod.
Specimens of these are given later; the earhest, if the
tradition of its origin is correct, dates from^SQme.time
welTbeforeJSSO.i '" ' X
On the evidence we are not entitled to ascribe the
beginnings of the new poetry to any particular person.
With regard to Ireland, Professor Douglas Hyde wi'ites :
"The earhest intimations of the new school which I
have been able to come across occur towards the very
close of the sixteenth century."^ The movement
appears to have been practically simultaneous in
Ireland and Scotland. It is therefore reasonable to
suppose that similar causes were at work in both
countries. One of these was the decay of the trained
professional poets and of the bardic schools, and the
correspondingly increased importance of untrained or
only partly trained poets, who, when they used the
structure of the synabic metres, would disregard the
refinements. Another factor was the strongly stressed
songs of labour, the iorram, &c., which, whether based
on the older metres (as some at least undoubtedly
were), or independent of them, must have had great
popular vogue. Concurrently with these circum-
J P. ^fWuT To these may be added a poem to Sir Roderick ^L^i
Macleod of Dunvegan (d. 1626), beginning —
Soraidh no dhà le dùrachd bhuam ^
Gu cuirtear deas a cheoil, cl
Gu guala thrèin nan lùirichean
Is nam bratach cùbhraidh sròil.
—Ijiv. G.S. Tr. 26, 235.
2 Hìstory of Irish Literafure, p. 544.