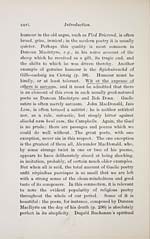 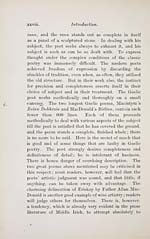 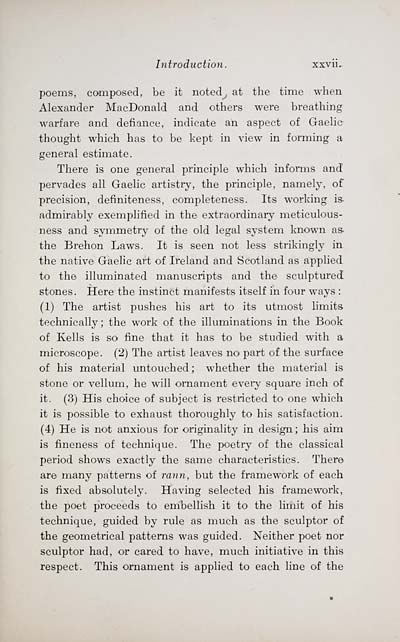 Introduction . xxvii..
poems, composed, be it noted^ at the time when
Alexander MacDonald and others were breathing
warfare and defiance, indicate ah aspect of Gaelic
thought which has to be kept in view in forming a
general estimate.
There is one general principle which informs and'
pervades all Gaehc artistry, the principle, namely, of
precision, definiteness, completeness. Its working is-
admirably exempHfied in the extraordinary meticulous-
ness and symmetry of the old legal system known as-
the Brehon Laws. It is seen not less strikingly in
the native GaeHc art of Ireland and Scotland as apphed
to the illuminated manuscripts and the sculptured
stones. Here the instinct manifests itself in four ways :
(1) The artist pushes his art to its utmost hmits
technically ; the work of the iHuminations in the Book
of Kells is so fine that it has to be studied with a
microscope. (2) The artist leaves no part of the surface
of his material untouched; whether the material is
stone or vellum, he will ornament eveiy square inch of
it. (3) His choice of subject is restricted to one which
it is possible to exhaust thoroughly to his satisfaction.
(4) He is not anxious for originahty in design; his aim
is fineness of technique. The poetry of the classical
period shows exactly the same characteristics. Ther©
are many pattems of rann, but the framework of each
is fixed absolutely. Having selected his framework,
the poet proceeds to erribenish it to the hmit of his
technique, guided by rule as much as the sculptor of
the geometrical pattems was guided. Neither poet nor
sculptor had, or cared. to have, much initiative in this
respect. This ornament is apphed to each line of the