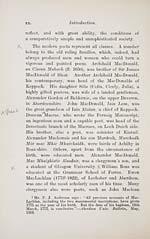 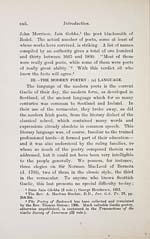 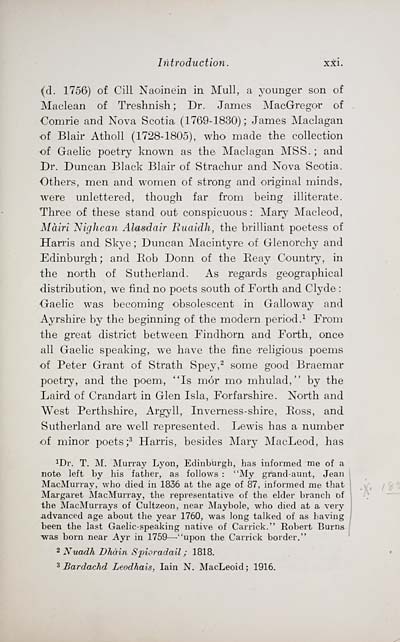 Introductioìi. xxi.
(d. 1756) of Cill Naoinein in MuU, a youngex* son of
Maclean of Treshnish ; Dr. James MacGregor of
Comrie and Nova Scotia (1769-1830); James Maclagan
of Blair Atholl (1728-1805), who made the collection
■of Gaelic poetry known as the Maclagan MSS. ; and
Dr. Duncan Black Blair of Strachur and Nova Scotia.
Others, men and women of strong and original minds,
were unlettered, though far from being illiterate.
Three of these stand out conspicuous : Mary Macleod,
Màiri Nighean Al-asdair Ruaidh, the brilliant poetess of
Harris and Skye; Duncan Macintyre of Glenorchy and
Edinburgh; and Kob Donn of the Eeay Countiy, in
the north of Sutherland. As regards geographical
distribution, we fìnd no poets south of Porth and Clyde :
Gaelic was becoming obsolescent in Galloway and
Ayrshire by the beginning of the modern period.^ From
the great district between Findhorn and Forth, once
all GaeHc speaking, we have the fine rehgious poems
of Peter Grant of Strath Spey,^ some good Braemar
poetry, and the poemi, "Is mòr mo' mhulad," by the
Laird of Crandart in Glen Isla, Forfarshire. North and
West Perthshire, Argyll, Invemess-shire, Eoss, and
Sutherland are well represented. Lewis has a number
of minor poets;^ Harris, besides Mary MacLeod, has
iDr. T. M. Murray Lyon, Edinbùrgh, has informed me of a
note left by his father, as follows : "My grand-aunt, Jean
MacMurray, who died in 1836 at the age of 87, informed me that
Margaret MacMurray, the representative of the elder branch of
the MacIMurrays of Cultzeon, near Maybole, who died at a very
advanced age about the year 1760, was long talked of as having
been the last Gaelic-speaking native of Carrick." Robert Burns
was born near Ayr in 1759 — -"upon the Carrick border."
2 Nvadh Dhàin Spioradail ; 1818.
^ Bardachd Leodhais, lain N. MacLeoid; 1916.