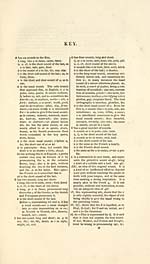 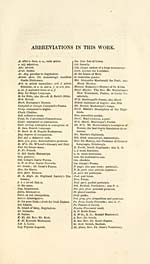 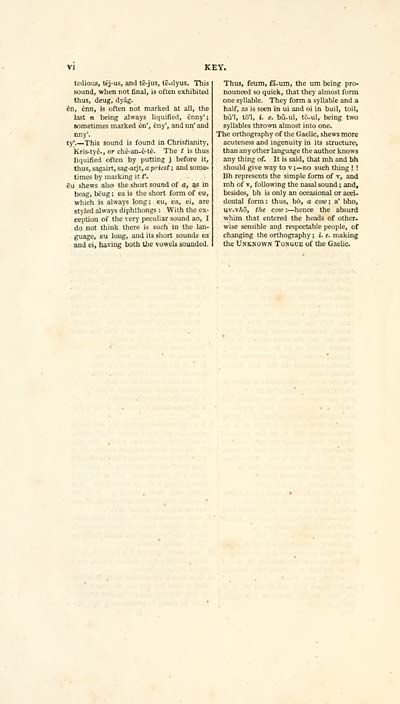 VI
tedious, tej-us, and te-jus, tè-dyus. This
sound, when not final, is often exhibited
thus, deug, dyag.
en, ènn, is often not marked at all, the
last n being always liquified, enny';
sometimes marked èn', èny', and nn' and
nny'.
ty'.— This sound is found in Chrisfianity,
Kris-tyè-, or ehè-an.è-tè. The t is thus
liquified often by putting j before it,
thus, sagairt, sag-aijt, a priest ; and some-
times by marking it t'.
eu shews also the short sound of a, gs in
beag, beug ; ea is the short form of eu,
which is always long; eu, ea, ei, are
styled always diphthongs : With the ex-
ception of the very peculiar sound ao, I
do not think there is such in the lan-
guage, eu long, and its short sounds ea
and ei, having both the vowels sounded.
Thus, feum, fa-um, the um being pro-
nounced so quick, that they almost form
one syllable. They form a syllable and a
half, as is seen in ui and oi in buil, toil,
bCi'l, to'l, i. e. bù-ul, to-ul, being two
syllables thrown almost into one.
The orthography of the Gaelic, shews more
acuteness and ingenuity in its structure,
than any other language the author knows
any thing of. It is said, that mh and bh
should give way to v ;— no such thing ! !
Bh represents the simple form of v, and
mh of V, following the nasal sound ; and,
besides, bh is only an occasional or acci-
dental form: thus, bo, a cow; a' bho,
uv.vAò, the cow :— hence the absurd
whim that entered the heads of other-
wise sensible and respectable people, of
changing the orthography ; i. e. making
the Unknown Tongue of the Gaelic