Books and other items printed in Gaelic from 1871 to 1900 > Sar-obair nam bard Gaelach, or, The beauties of Gaelic poetry, and lives of the Highland bards 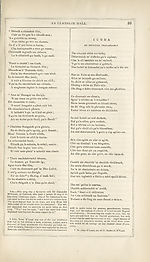 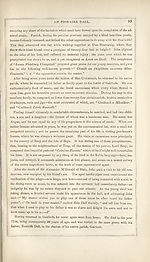 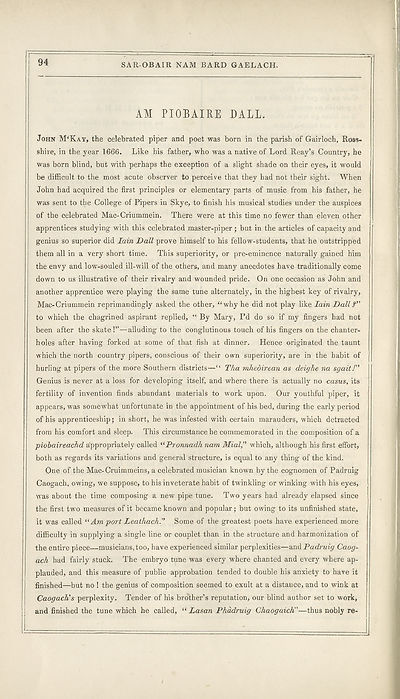 94
SAR-OBAIR NAM BARD GAELACH.
jr
]i
AM PIOBAIRE BALL.
John M‘Kay, the celebrated piper and poet was born in the parish of Gairloch, Ross-
shire, in the year 1666. Like his father, who was a native of Lord Reay’s Country, he
was born blind, but with perhaps the exception of a slight shade on their eyes, it would
be difficult to the most acute observer to perceive that they had not their sight. When
John had acquired the first principles or elementary parts of music from his father, he
was sent to the College of Pipers in Skye, to finish his musical studies under the auspices
of the celebrated Mac-Criummein. There were at this time no fewer than eleven other
apprentices studying with this celebrated master-piper ; but in the articles of capacity and
genius so superior did Iain Dali prove himself to his fellow-students, that he outstripped
them all in a very short time. This superiority, or pre-eminence naturally gained him
the envy and low-souled ill-will of the others, and many anecdotes have traditionally come
down to us illustrative of their rivalry and wounded pride. On one occasion as John and
another apprentice were playing the same tune alternately, in the highest key of rivalry,
Mac-Criummein reprimandingly asked the other, “why he did not play like Iain Dali f'
to which the chagrined aspirant replied, “ By Mary, I’d do so if my fingers had not
been after the skate!”—alluding to the conglutinous touch of his fingers on the chanter-
holes after having forked at some of that fish at dinner. Hence originated the taunt
which the north country pipers, conscious of their own superiority, are in the habit of
hurling at pipers of the more Southern districts—“ Tha mhebirean as deighe na sgait!"
Genius is never at a loss for developing itself, and where there is actually no casus, its
fertility of invention finds abundant materials to work upon. Our youthful piper, it
appears, was somewhat unfortunate in the appointment of his bed, during the early period
of his apprenticeship; in short, he was infested with certain marauders, which detracted
from his comfort and sleep. This circumstance he commemorated in the composition of a
piobaireachd appropriately called “Pronnadh nam Mial,” which, although his first effort,
both as regards its variations and general structure, is equal to any thing of the kind.
One of the Mac-Cruimmeins, a celebrated musician known by the cognomen of Padruig
Caogach, owing, we suppose, to his inveterate habit of twinkling or winking with his eyes,
was about the time composing a new pipe tune. Two years had already elapsed since
the first two measures of it became known and popular; but owing to its unfinished state,
it was called “ Am port Leathach." Some of the greatest poets have experienced more
difficulty in supplying a single line or couplet than in the structure and harmonization of
the entire piece—musicians, too, have experienced similar perplexities—and Padruig Caog¬
ach had fairly stuck. The embryo tune was every where chanted and every where ap¬
plauded, and this measure of public approbation tended to double his anxiety to have it
finished—but no ! the genius of composition seemed to exult at a distance, and to wink at
Caogach's perplexity. Tender of his brother’s reputation, our blind author set to work,
j and finished the tune which he called, “ Lasan Phddruig Chaoguich"—thus nobly re-