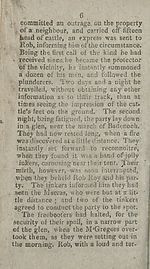 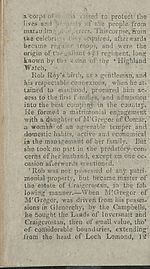 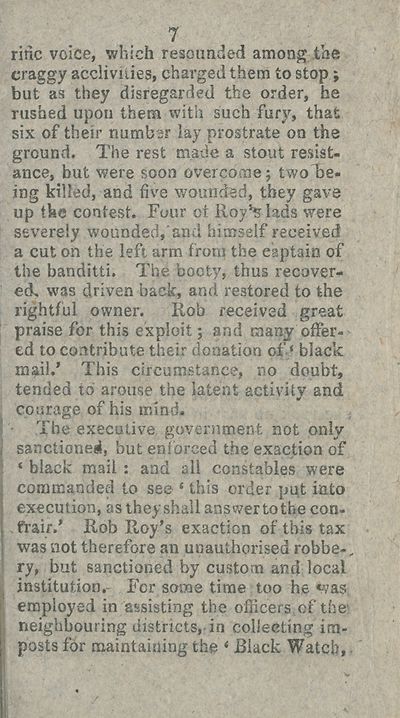 7
riiic voice, which resounded among the
craggy acclivities, charged them to stop;
but as they disregarded the order, he
rushed upon them with such fury, that
six of their number lay prostrate on the
ground. The rest made a stout resist¬
ance, but were soon overcome; twoTe-
ing killed, and five wounded, they gave
up tke contest. Four ct Roy’s lads were
severely wounded,'and himself received
a cut on the left arm from the captain of
the banditti. The booty, thus recover¬
ed. was driven hack, and restored to the
rightful owner. Rob received great
praise for this exploit; and many offer¬
ed to contribute their donation of ‘ black
mail.’ This circumstance, no doubt,
tended to arouse the latent activity and
j| courage of his mind*
{ ■ The executive government not only
sanctioned, but enforced the exaction of
‘ black mail : and all constables were
commanded to see ‘ this order put into
execution, as they shall answer to the con-
1 frair.’ Rob Roy’s exaction of this tax
was not therefore an unauthorised robbe-,
ry, but sanctioned by custom and local
1 institution. For some time too he was
employed in assisting the officers of the
neighbouring districts, in collecting im¬
posts for maintaining the * Black Watch,