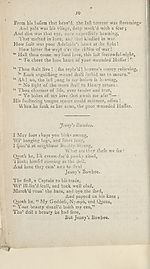 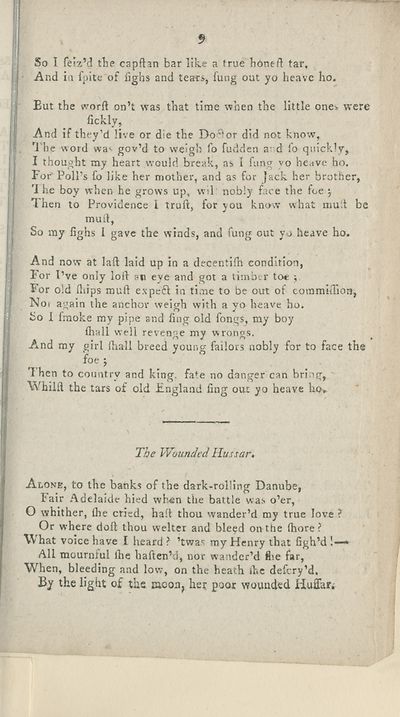 So I feiz’d the capftan bar like a true honed tar.
And iu foite of iighs and tears, iung oat yo heave ho.
Eut the word on’t was that time when the little ones were
fickly.
And if they’d live or die the Do^or did not know,
The word wa* gov’d to weigh fo fudden a: d Co quickly,
I thought my heart would break, as I fung vo heave ho.
For' Poll’s fo like her mother, and as for Jack her brother,
1 he boy when he grows up, wd nobly face the foe ^
Then to Providence 1 truft, for you know what mud be
muil,
So my fighs 1 gave the winds, and fung out yo heave ho.
And now at lad laid up in a decentifn condition,
lor I’ve only lod an eye and got a limber toe ;
For old (hips mud e.\pe£t in time to be out of cotnmiiTion,
Noi again the anchor weigh with a yo heave ho.
So 1 fmoke my pipe and fing old fongs, my boy
fliall well revenge my wrongs.
And my girl (hall breed young failors nobly for to face the
foe ;
Then to country and king, fate no danger can bring,
Whild the tars of old England fing out yo heave ho..
The Wounded Hussar.
Alone, to the banks of the dark-rolling Danube,
Fair Adelaide hied when the battle was o’er,
O whither, die cried, had thou wander’d my true love ?
Or where dod thou welter and bleed on the (hore ?
What voice have I heard ? ’twas my Henry that figh’d !—«
All mournful the haden’d, nor wander’d flie far,
Wrhen, bleeding and low, on the heath the defery’d.
By the light of the moon, her poor wounded Huffar.