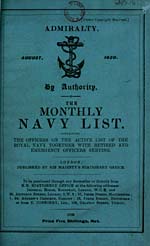 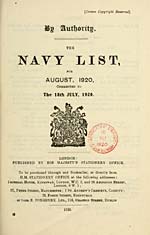 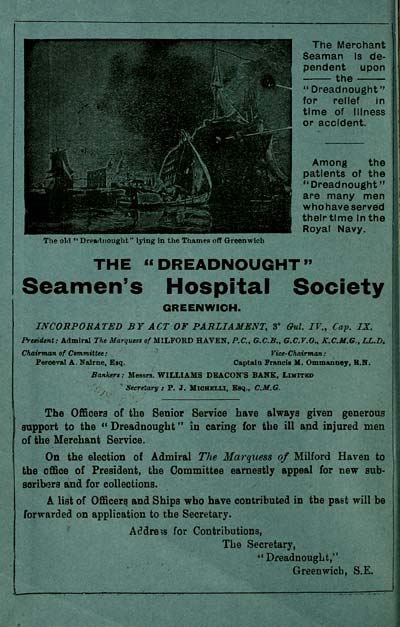 The Merchant
Seaman Is de-
pendent upon
the
"Dreadnought"
for relief in
time of Illness
or accident.
Among the
patients of the
"Dreadnought"
are many men
who have served
their time In the
Royal Navy.
The old " Dreadnought" lying in the Thames off Greenwich
THE "DREADNOUGHT"
Seamen's Hospital Society
GREENWICH.
INCORPORATED BY ACT OF PARLIAMENT, 3° Qui. IV., Cap. IX.
President: Admiral The Marquess of MILFORD HAVEN, P.C., G.C.B., G.C.V.O., K.C.M.G.,LL.D.
Chairman of Committee : Vice- Chairman :
Perceval A. Nairne, Esq. Captain Francis M. Ommanney, B.N.
Bankers : Messrs. WILLIAMS DEACON'S BANK, Limited
Secretary : P. J. Mioheuli, Esq., C.M.G.
The Officers of the Senior Service have always given generous
support to the " Dreadnought " in caring for the ill and injured men
of the Merchant Service.
On the election of Admiral The Marquess of Milford Haven to
the office of President, the Committee earnestly appeal for new sub-
scribers and for collections.
A list of Officers and Ships who have contributed in the past will be
forwarded on application to the Secretary.
Address for Contributions,
The Secretary,
"Dreadnought,"
Greenwich, S.E.
u