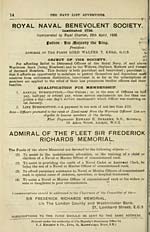 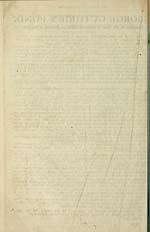 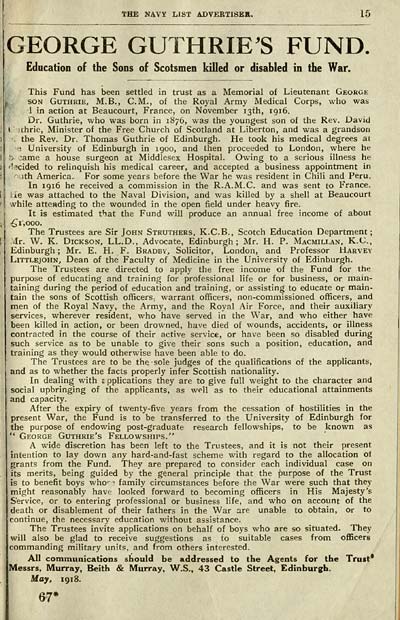 THE NAVY LIST ADVERTISER. 15
GEORGE GUTHRIE'S FUND.
Education of the Sons of Scotsmen killed or disabled in the War.
This Fund has been settled in trust as a Memorial of Lieutenant George
son Guthrie, M.B., C.M., of the Royal Army Medical Corps, who was
1 in action at Beaucourt, France, on November 13th, 1916.
Dr. Guthrie, who was born in 1876, was the youngest son of the Rev. David
» ihrie, Minister of the Free Church of Scotland at Liberton, and was a grandson
the Rev. Dr. Thomas Guthrie of Edinburgh. He took his medical degrees at
<i University of Edinburgh in 1900, and then proceeded to London, where he
p :ame a house surgeon at Middlesex Hospital. Owing to a serious illness he
< 1: n:ided to relinquish his medical career, and accepted a business appointment in
r ith America. For some years before the War he was resident in Chili and Peru.
In 1916 he received a commission in the R.A.M.C. and was sent to France.
i±e was attached to the Naval Division, and was killed by a shell at Beaucourt
while attending to the wounded in the open field under heavy fire.
It is estimated that the Fund will produce an annual free income of about
£1,000.
The Trustees are Sir John Struthers, K.C.B., Scotch Education Department ;
Jlr. W. K. Dickson, LL.D., Advocate, Edinburgh; Mr. H. P. Macmili.an, K.C,
Edinburgh; Mr. E. H. F. Bradby, Solicitor, London, and Professor Harvey
Littlejohn, Dean of the Faculty of Medicine in the University of Edinburgh.
The Trustees are directed to apply the free income of the Fund for the
purpose of educating and training for professional life or for business, or main-
taining during the period of education and training, or assisting to educate or main-
tain the sons of Scottish officers; warrant officers, non-commissioned officers, and
men of the Royal Navy, the Army, and the Royal Air Force, and their auxiliary
services, wherever resident, who have served in the War, and who either have
been killed in action, or been drowned, have died of wounds, accidents, or illness
contracted in the course of their active service, or have been so disabled during
such service as to be unable to give their sons such a position, education, and
training as they would otherwise have been able to do.
The Trustees are to be the sole judges of the qualifications of the applicants,
and as to whether the facts properly infer Scottish nationality.
In dealing with zpplications they are to give full weight to the character and
social upbringing of the applicants, as well as to their educational attainments
and capacity.
After the expiry of twenty-five years from the cessation of hostilities in the
present War, the Fund is to be transferred to the University of Edinburgh for
the purpose of endowing post-graduate research fellowships, to be known as
I George Guthrie's Fellowships."
A wide discretion has been left to the Trustees, and it is not their present
intention to lay down any hard-and-fast scheme with regard to the allocation of
grants from the Fund. They are prepared to consider each individual case on
its merits, being guided by the general principle that the purpose of the Trust
is to benefit boys who^ family circumstances before the War were such that they
might reasonably have looked forward to becoming officers in His Majesty's
Service, or to entering professional or business life, and who on account of the
death or disablement of their fathers in the War are unable to obtain, or to
continue, the necessary education without assistance.
The Trustees invite applications on behalf of boys who are so situated. They
will also be glad to receive suggestions as to suitable cases from officers
commanding military units, and from others interested.
All communications should be addressed to the Agents for the Trust*
Messrs, Murray, Beith & Murray, W.S., 43 Castle Street, Edinburgh.
May, 1918.
67*