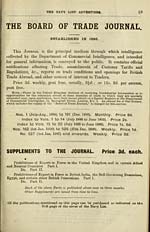 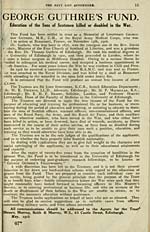 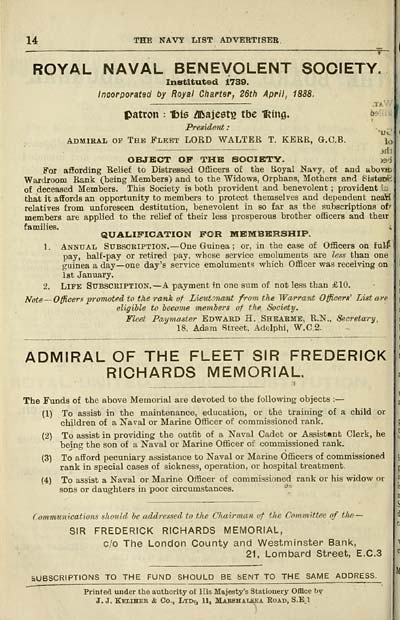 patron : Dte Albajestg tbe fting.
President :
Admiral OF THE FLEET LORD WALTER T. KERR, G.C.B. i
LK
OBJECT OF TUB SOCIETY. jg-j
For affording Relief to Distressed Officers of the Royal Navy, of and abova>
Wardroom Rank (being Members) and to the Widows, Orphans, Mothers and Biatanfe
of deceased Members. This Society is both provident and benevolent ; provident igj
that it affords an opportunity to members to protect themselves and dependent neaM
relatives from unforeseen destitution, benevolent in so far as the subscriptions of'
members are applied to the relief of their less prosperous brother officers and their
families. i
QUALIFICATION FOR MEMBERSHIP.
1. Annual Subscription. — One Guinea ; or, in the case of Officers on fultf
pay, half-pay or retired pay, whose service emoluments are less than one
guinea a day — one day's service emoluments which Officer was receiving on
1st January.
2. Life Subscription. — A payment in one sum of not less than £10.
Wcte — Officers promoted to the rank of Lieutenant from the Warrant Officers' List are
eligible to become members of the Society.
Fleet Paymaster Edward H. Shearme, R.N., Secretary,
18. Adam Street. Adelphi, W.C.2.
ADMIRAL OF THE FLEET SIR FREDERICK
RICHARDS MEMORIAL.
The Funds of the above Memorial are devoted to the following objects :—
(1) To assist in the maintenance, education, or the training of a child or
children of a Naval or Marine Officer of commissioned rank.
(2) To assist in providing the outfit of a Naval Cadet or Assistant Clerk, he
being the son of a Naval or Marine Officer of commissioned rank.
(3) To afford pecuniary assistance to Naval or Marine Officers of commissioned
rank in special cases of sickness, operation, or hospital treatment.
(4) To assist a Naval or Marine Officer of commissioned rank or his widow or
sons or daughters in poor circumstances.
Communications should be addressed to the Chairman of the Committee of the —
SIR FREDERICK RICHARDS MEMORIAL,
c/o The London County and Westminster Bank,
21, Lombard Street, E.C.3
SUBSCRIPTIONS TO THE FUND S HOULD BE SENT TO THE SAME ADDRESS.
Printed under the authority of His Majesty's Stationery Office by
J. J. KELIHER & CO., LtDt, 11, JtAJBSHALSEA ROAD, S.B.,1