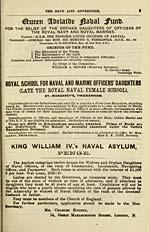 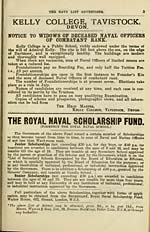 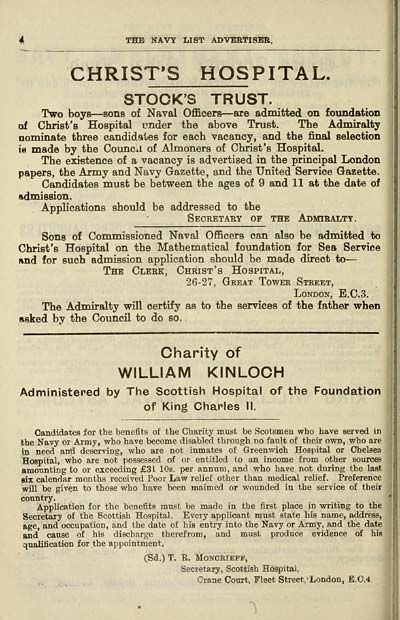 THE NAVY LIST ADVEBTISER.
CHRIS T'S HOS PITAL.
STOCK'S TRUST.
Two boys — sons of Naval Officers — are admitted on foundation
of Christ's Hospital under the above Trust. The Admiralty
nominate three candidates for each vacancy, and the final selection
is made by the Council of Almoners of Christ's Hospital.
The existence of a vacancy is advertised in the principal London
papers, the Army and Navy Gazette, and the United Service Gazette.
Candidates must be between the ages of 9 and 11 at the date of
admission.
Applications should be addressed to the
Secretary of the Admiralty.
Sons of Commissioned Naval Officers can also be admitted to
Christ's Hospital on the Mathematical foundation for Sea Service
and for such admission application should be made direct to —
The Clerk, Christ's Hospital,
26-27, Great Tower Street,
London, E.C.3.
The Admiralty will certify as to the services of the father when
asked by the Council to do so.
Charity of
WILLIAM KINLOCH
Administered by The Scottish Hospital of the Foundation
of King Charles II.
Candidates for the benefits of the Charity must be Scotsmen who have served in
the Navy or Army, who have become disabled through no fault of their own, who are
in need and deserving, who are not inmates of Greenwich Hospital or Chelsea
Hospital, who are not possessed of or entitled to an income from other sources
amounting to or exceeding £31 10s. per annum, and who have not during the last
Bix calendar months received Poor Law relief other than medical relief. Preference
will be given to those who have been maimed or wounded in the service of their
country.
Application for the benefits must be made in the first place in writing to the
Secretary of the Scottish Hospital. Every applicant must state his name, address,
age, and occupation, and the date of his entry into the Navy or Army, and the date
and cause of his discharge therefrom, and must produce evidence of his
qualification for the appointment.
(Sd.) T. E. MONCRIEFF,
Secretary, Scottish Hospital,
Crane Court, Fleet Street,' London, E.C4.