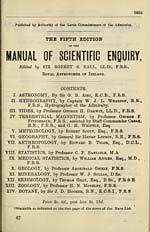 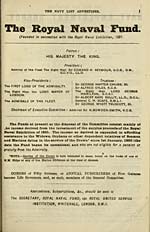 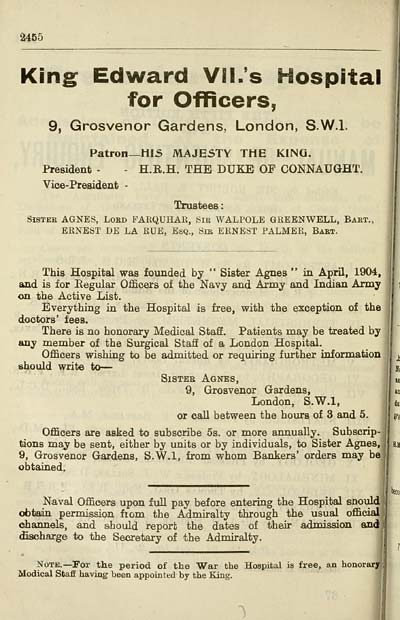 2455
King Edward VIl.'s Hospital
for Officers,
9, Grosvenor Gardens, London, S.W.I.
Patron— HIS MAJESTY THE KING.
President - - H.K.H. THE DUKE OF CONNAUGHT.
Vice-President -
Trustees :
Sister AGNES, Loud FARQUHAR, Sir WALPOLE GREENWELL, Bart.,
ERNEST DE LA RUE, Esq., Sir ERNEST PALMER, Bart.
This Hospital was founded by " Sister Agnes " in April, 1904,
and is for Begular Officers of the Navy and Army and Indian Army
on the Active List.
Everything in the Hospital is free, with the exception of the
doctors' fees.
There is no honorary Medical Staff. Patients may be treated by
any member of the Surgical Staff of a London Hospital.
Officers wishing to be admitted or requiring further information
should write to —
Sister Agnes,
9, Grosvenor Gardens,
London, S.W.I,
or call between the hours of 3 and 5.
Officers are asked to subscribe 5s. or more annually. Subscrip-
tions may be sent, either by units or by individuals, to Sister Agnes,
9, Grosvenor Gardens, S.W.I, from whom Bankers' orders may be
obtained.
Naval Officers upon full pay before entering the Hospital snould.
obtain permission fiom the Admiralty through the usual official
channels, and should report the dates of their admission and
discharge to the Secretary of the Admiralty.
Note.— For the period of the "War the Hospital is free, an honors
Modical Staff having been appointed by the King.